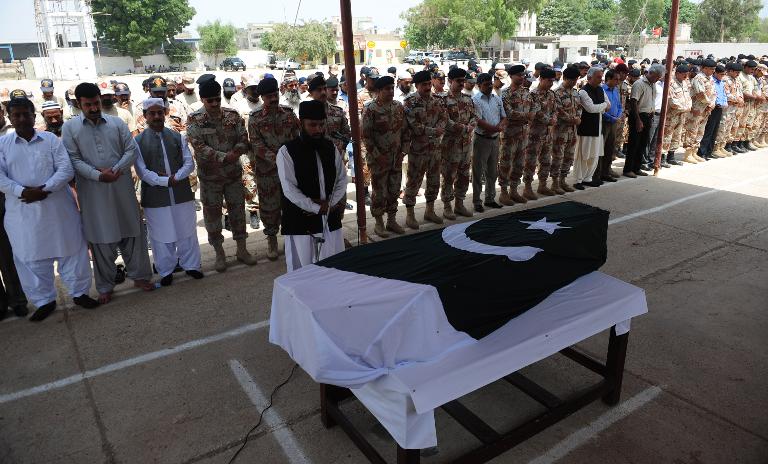 Pakistan launched air strikes on a militant-infested tribal district Tuesday, killing 15 people a day after a Taliban attack on Karachi airport that stoked rumours of an all-out offensive on insurgent strongholds.

The military said nine “terrorist hideouts” were destroyed in the raids, launched in apparent retaliation after the Taliban stormed Pakistan’s biggest airport, killing 37 people in an all-night battle that ended Monday.

The early morning air strikes are the latest in a succession of attacks carried out by the Pakistani military in the tribal belt this year after talks with the Tehreek-e-Taliban Pakistan (TTP) broke down.

The last was in North Waziristan in late May, killing at least 75 people and triggering an exodus of some 58,000 people — half of them in the past few days in fear of a ground offensive that has been anticipated for years.

The district is believed to be home to several militant factions, most notably Lashkar-e-Islam, led by warlord Mangal Bagh, as well the TTP and foreign fighters from Central Asia.

Pakistan began talks with the TTP in February, with a ceasefire agreed in March but breaking down a month later.

Many observers believe that following the Karachi attack the peace process is dead and that the government must now take more strident measures.

An offensive there has been long rumoured but analysts are cautious about whether the military has the ability to carry out the operation without assistance from the Afghan side of the border where militants are likely to flee in the event of an attack.

Residents’ flight from the region has been fuelled by a leaflet distributed last week by local warlord Hafiz Gul Bahadur, who is seen as friendly to Pakistan while concentrating his attacks on NATO forces in neighbouring Afghanistan.

Bahadur’s leaflet, seen by AFP, told residents to leave their homes because the government was likely to begin an offensive, and included a veiled threat to join hands with the TTP if the government did not end agree to end air strikes there.

In a statement on Monday claiming credit for the airport raid, the TTP said it was prepared “to defend the tribal brothers in case of declaration of a war by Hafiz Gul Bahadur”.

Talat Masood, a retired general and security analyst, said there was pressure on the government to target both North Waziristan as well as TTP sleeper cells in major cities, especially Karachi, which has a large population from the tribal areas.

“There is an urgent need to neutralise such attacks and the government should take firm action in the areas which are their hideouts,” he said.

“A simultaneous action should be taken against the militants in Karachi and elsewhere along with North Waziristan.”

The death toll from the airport attack rose Tuesday after the recovery of the charred bodies of seven workers who hid in a cold-storage facility to escape but were later engulfed in flames.

The victims’ families staged a protest on a main road in Karachi Monday night demanding authorities find their relatives, saying they had been in contact via telephone during the attack.