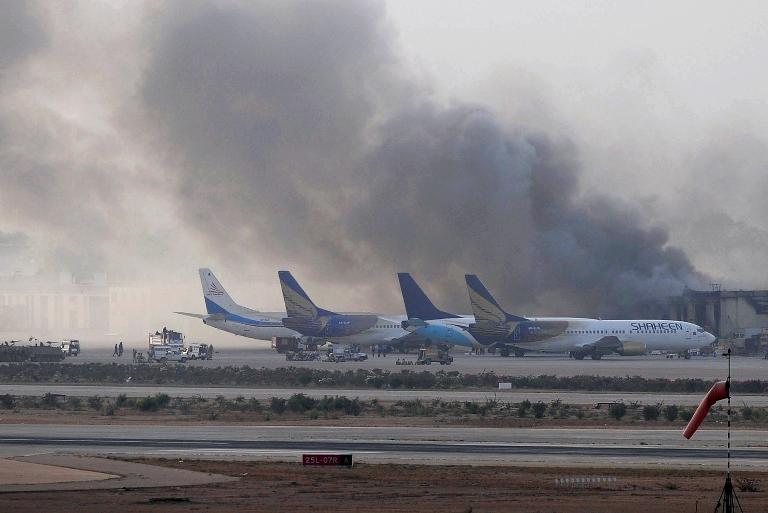 The assault has left Pakistan’s nascent peace process with the Tehreek-e-Taliban Pakistan (TTP) in tatters and officials in the northwest reported that some 25,000 people had fled a restive tribal district in the past 48 hours, fearing a long-awaited ground offensive.

Ten militants were among the dead in the assault on Karachi’s Jinnah International Airport, the latest spectacular offensive to be launched by the TTP in an insurgency that has claimed thousands of lives since 2007.

Authorities were checking reports that seven airport workers were trapped in cold-storage facilities after apparently shutting themselves inside to escape the carnage.

“We are looking into this and according to the families some seven people were trapped inside the cold storage and were in contact with the families on cell phone,” said Abid Qaimkhani, a spokesman for the Civil Aviation Authority.

The attack began just before midnight Sunday. At around dawn, the military said that all 10 of the attackers had been killed.

Some of the gunmen were dressed in army uniform, as authorities put their mangled bodies, assault rifles, grenades and rocket launchers on show for the press. At least three detonated their suicide vests, witnesses said, and one severed head formed part of the grisly display.

“The main objective of the terrorists was to destroy the aircraft on the ground but there was only minor damage to two to three aircraft,” Interior Minister Chaudhry Nisar Ali Khan told a press conference at the airport late Monday.

“Pakistan’s national assets are safe and secure.” Washington condemned the attack and offered to assist with the investigation.

Ban was “deeply concerned by this upsurge of violence across Pakistan” and urged the government to increase its efforts to address terrorism and religious extremism, his spokesman Stephane Dujarric said in a statement.

The bodies of the 18 victims — including 11 airport security guards and four workers from Pakistan International Airlines (PIA) — were taken to a Karachi hospital where another 26 wounded people were being treated, a hospital official said.

The charred remains of two cargo terminal employees were later recovered on Monday night, bring the toll to 30, Qaimkhani said.

PIA spokesman Mashud Tajwar said no airline passengers were caught up in the incident.

Prime Minister Nawaz Sharif’s office issued a statement “commending the bravery” of security forces and saying normal flight operations would resume in the afternoon, while Afghan President Hamid Karzai — who is battling his own Taliban insurgency — condemned the attack in a statement.

The attack took place just three kilometres (two miles) from the Mehran naval base, which the Taliban laid siege to three years ago, destroying two US-made Orion aircraft and killing 10 personnel in a 17-hour operation.

The group also carried out a raid on Pakistan’s military headquarters in the garrison city of Rawalpindi in 2009, leaving 23 dead including 11 troops and three hostages.

The TTP said the brazen attack on the airport was its latest revenge for the killing of its leader Hakimullah Mehsud in a US drone strike in November.

TTP spokesman Shahidullah Shahid said the government had used peace talks as a ruse, and promised more attacks to come in retaliation against recent air strikes in the tribal areas bordering Afghanistan.

Talks to end the TTP’s bloody seven-year insurgency have been under way since February, after Sharif returned to power last year, but little clear progress has resulted and more than 300 people have been killed in militant strikes since then.

Analysts say Sharif is under pressure to act and risks angering the army if he does not authorise a swift retaliation.

In restive North Waziristan tribal district some 1,000 kilometres north of Karachi, residents and officials told AFP 58,000 people, mainly women and children had fled the area for different parts of the northwest, fearing a long-awaited offensive was imminent.

The exodus has increased rapidly in recent days, with more than 25,000 fleeing their homes in the last 48 hours alone, a government official in Peshawar said.

“I am taking my family to a safer location,” said one resident who did not wish to be named.

The latest rumours of an operation began after government talks with the TTP broke down in April, and were further stoked by the air strikes and the widespread distribution of a leaflet from a local warlord last week warning residents they should leave their homes by June 10.

An offensive in North Waziristan has been rumoured for years but analysts remain cautious about whether the military has the capacity to attempt such a move without assistance from the Afghan side of the border where militants are likely to flee in the event of an attack.