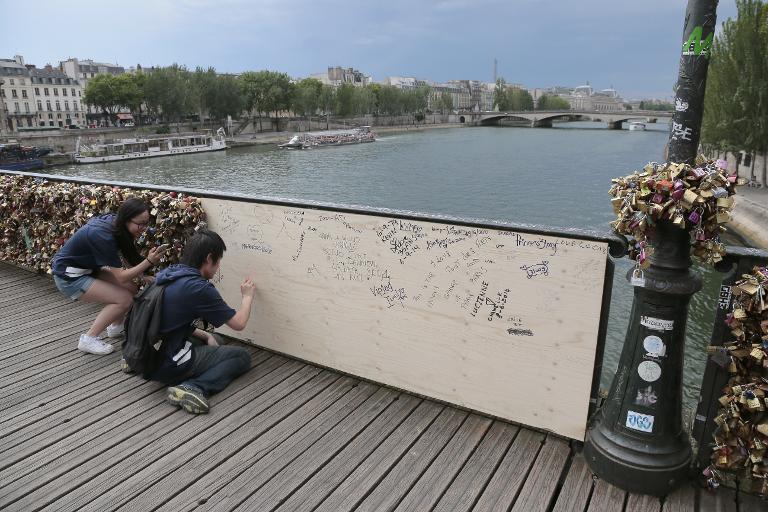 A bridge in Paris famed for the thousands of “locks of love” that controversially line its railings has reopened after it was urgently closed when part of a padlock-laden barrier collapsed, authorities said Monday.

Thousands of couples from across the world visit the picturesque Pont des Arts every year and seal their love by attaching a padlock to its railing and throwing the key into the Seine.

But this tradition has become controversial as critics say it causes damage to the structure in central Paris.

On Sunday evening, police were forced to hurriedly evacuate the footbridge after two and a half metres (eight feet) of railing collapsed under the weight of the tokens of affection.

The city council said Monday that the bridge that spans the Seine near the Louvre museum reopened later on Sunday evening.

“The two railings that collapsed were temporarily replaced by wooden planks,” Bruno Julliard, a deputy mayor in charge of cultural affairs, told AFP.

The “locks of love” phenomenon has spread to other bridges and structures in the capital since they first made an appearance in 2008, to the joy of some and consternation of others who see them as eyesores and security risks.

Forty locks were also recently removed from the Eiffel Tower.

More than 7,400 people have signed a petition launched by two American Paris-lovers in March calling for the locks to be removed from the Pont des Arts.

Julliard, who has been tasked with finding a solution to the problem, said the latest incident “reinforces our conviction that there is a real necessity to find an alternative.”