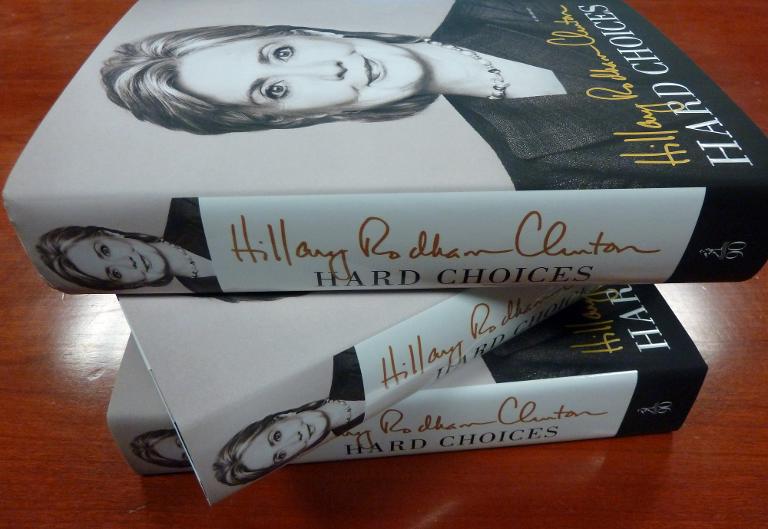 The former secretary of state presides Tuesday over the closely-managed rollout of her new memoir, “Hard Choices,” which many observers interpret as an unofficial kickoff of her prospective 2016 presidential campaign.

After visiting 112 countries in her four years as top diplomat, Clinton sheds light on her dealings with power players at the heart of some of the world’s intractable problems — and how her ties with them often set the tone in negotiations.

“The personal element matters more in international affairs than many would expect, for good or ill,” she writes.

Among her most difficult relationships as America’s top diplomat was with Putin, with whom she had rocky ties after the failed US-Russia “reset” at the outset of the Obama presidency.

“He’s always testing you, always pushing the boundaries,” she writes of Russia’s president, whom she described as an autocratic leader with an “appetite for more power, territory and influence.”

In criticizing the Kremlin’s takeover of Crimea this year and its aggression in eastern Ukraine, Clinton warned such moves could backfire against a country already saddled with a sputtering economy.

“Think also of the long-term strategic interests Russia could pursue if Putin weren’t fixated on reclaiming the Soviet empire and crushing domestic dissent,” she writes.

With the United States and China the world’s two largest economies, the “predictability (and) formality” from leaders like Hu made sense to Clinton. But she stressed that Hu lacked the “personal authority” of predecessors like Deng Xiaoping.

“Hu seemed to me more like an aloof chairman of the board than a hands-on CEO,” she explained, citing her trips to Beijing where she often held more fruitful meetings with lower level dignitaries.

“How in control he really was of the entire sprawling Communist Party apparatus was an open question.”

She reserved poignant criticism for Iran’s Ahmadinejad, whom she described as “a Holocaust denier and provocateur who… insulted the West at every turn.”

The Iranian leader showed himself to be a “bellicose peacock strutting on the world stage,” and unwilling to thaw the chilled relations with Washington enough to engage in meaningful negotiations over Tehran’s controversial nuclear program — a stubbornness which contributed to Washington slapping sanctions on the Islamic republic.

“President Ahmadinejad’s second term was a disaster, and his political standing at home had collapsed.”

Clinton wrote that her years of knowing Israel’s Benjamin Netanyahu helped ease their occasionally strained debates over the Mideast peace process and Iran’s nuclear program, which she said Netanyahu believed “was a bigger and more urgent threat to Israel’s long-term security than the Palestinian conflict.”

“I learned that Bibi would fight if he felt he was being cornered, but if you connected with him as a friend, there was a chance you could get something done.”

Among other US allies, few appeared to hold as much sway for Clinton as German Chancellor Angela Merkel, whom she described as “the most powerful leader in Europe.”

“She was carrying Europe on her shoulders,” she said of Merkel, whom she first met back in 1994 when Hillary and her husband, then-president Bill Clinton, travelled to Berlin.

With leaders like Merkel quiet and reserved in person, France’s Nicolas Sarkozy proved the opposite, often offering “rapid-fire, almost stream-of-consciousness soliloquies” on foreign policy that sucked the oxygen out of a room.

“He would gossip, casually describing other world leaders as crazy or infirm,” she said. “One was a ‘drug-addled maniac’; another had a military ‘that didn’t know how to fight’; yet another came from a long line of ‘brutes.'”

But Clinton insisted that “despite his exuberance, (Sarkozy) was always a gentleman.”