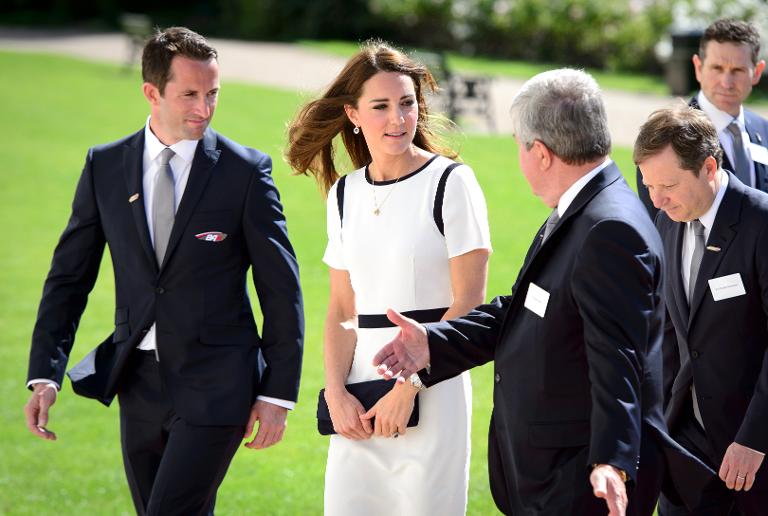 Ainslie, who famously helped Oracle Team USA overturn an 8-1 deficit to win last year’s most recent edition of the historic race, met the Duchess of Cambridge at the National Maritime Museum in Greenwich, south-east London.

Kate, who wore a Jaeger dress, is a sailing enthusiast.

She beat her husband in a ‘friendly’ race when the pair were on rival yachts during an event in Auckland Harbour in April — in yachts used by New Zealand in the America’s Cup.

Her backing for the British team will be a long-term commitment and will see her “getting out there” in support, a Kensington Palace spokeswoman said.

Lord Michael Grade, a board member of the British bid to win the Americas Cup and the former boss of Channel 4 television, said of Kate: “She’s a keen sailor, she loves her sailing clearly, you can just tell. You can see it in her eyes.

“It’s great for everybody she’s got behind it and supporting it.”

Meanwhile fellow board member Keith Mills said Ainslie had offered to take Prince George, William and Kate’s young son, out on the water when he is old enough, and that the Duchess had readily agreed.

“We were all sharing sailing stories and sailing is in her family,” said Mills, who was deputy chairman of the London 2012 Olympic Games organising committee.

He added they would be inviting Kate to watch the 2017 race — whose US course has yet to be announced.

Although the America’s Cup started in 1851 with a race on the waters around the Isle of Wight, off the south coast of the English mainland, no British team has ever lifted the oldest trophy in international sport.

But four-time Olympic gold medallist Ainslie hopes to change all that when the next edition takes place in 2017.

“We want to bring it home, it would be an amazing thing for this country,” Ainslie said.

“That was a fantastic experience a great team, we have a lot of respect for them, for team New Zealand, all of the other competitors — but we want to win this for Britain.”

Ainslie, who is the most successful Olympic sailor of all time with four golds and a silver, appears well qualified for the task.

But that didn’t stop professional yachtsman Freddy Carr, who is a member of Ainslie’s crew, suggesting Kate as an alternative should the sailing great be found wanting.

“She was down in New Zealand in Auckland, sailing with their team on the New Zealand America’s Cup yachts, and did very well,” Carr said.