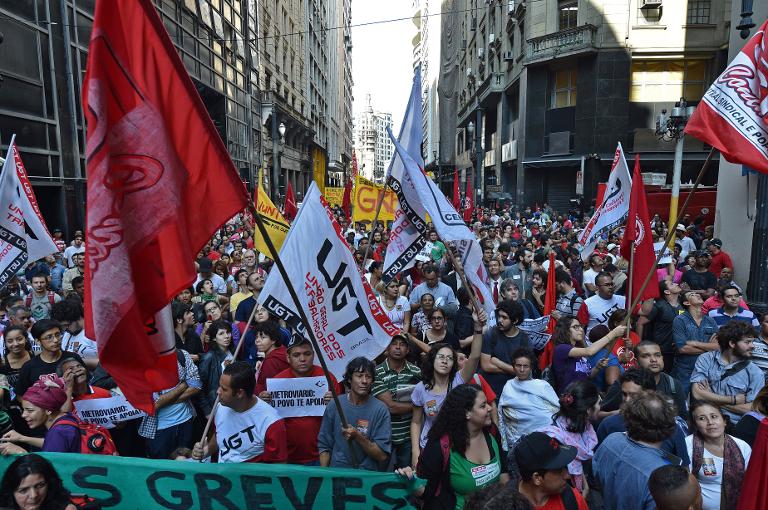 FIFA opens its 64th Congress under the cloud of a corruption scandal surrounding the awarding of the 2022 World Cup to Qatar, which has drawn rebukes from some of the world football body’s biggest sponsors.

Sao Paulo is meanwhile facing headaches of its own after subway workers threatened to resume a damaging strike on Thursday, the day the world’s eyes turn to the Brazilian mega-city for the start of a World Cup whose build-up has been plagued by delays, overspending and protests.

The workers voted Monday to suspend their five-day-old strike, which had caused massive traffic jams and cut off subway service to Corinthians Arena, the stadium hosting the opening ceremony and kick-off.

Officials are hard-pressed to avoid more problems as a billion people worldwide tune in to the game on TV.

UN Secretary General Ban Ki-moon and 12 heads of state and government will be in the stadium, which workers are rushing to finish on time.

Work on the 12 host stadiums has been overshadowed by accidents that have killed eight workers, including three at Corinthians Arena.

That together with construction delays, ballooning budgets and the shelving of promised infrastructure projects has fueled anger over the World Cup.

Brazil has been hit by a wave of strikes and protests ahead of the tournament and elections in October in which President Dilma Rousseff is seeking a second term.

Rising inflation and a sluggish economy have dented Brazilians’ enthusiasm for the World Cup.

In a nation with a wide and highly visible gap between rich and poor, critics say the more than $11 billion for the tournament would have been better spent on education, health, housing and transport.

Sao Paulo’s subway workers had been facing growing pressure to end the latest strike, which stranded many of the system’s 4.5 million daily riders.

A court ruled Sunday that the strike was illegal and slapped their union with a $222,000-a-day fine.

On Monday, police cracked down on picketing workers, detaining 13 of them, and fired tear gas to break up a protest in their support.

Authorities also fired 42 employees for “just cause,” accusing them of vandalism, blocking commuters and inciting people to jump turnstiles.

Union president Altino Melo dos Prazeres said workers would resume their walkout Thursday if the fired employees were not re-hired.

The union is seeking a raise of 12.2 percent, but the government is offering only 8.7 percent.

The workers are due to meet on the eve of the World Cup to decide their next move.

At the same time FIFA will be wrapping up its congress of world football federations, where president Sepp Blatter is expected to announce he will seek a fifth four-year term in the sport’s most powerful job.

That however will likely be overshadowed by allegations a former Qatari football boss paid more than $5 million in bribes to win the vote to host the 2022 tournament.

The scandal has sparked calls for a re-vote and led five of FIFA’s biggest sponsors — Hyundai, Coca Cola, Adidas, Sony and Visa — to demand a full investigation.

The Belgian and Nigerian teams are meanwhile due to arrive Tuesday. After that just three of the 32 teams will be missing: South Korea, Ghana and Portugal, all expected Wednesday.