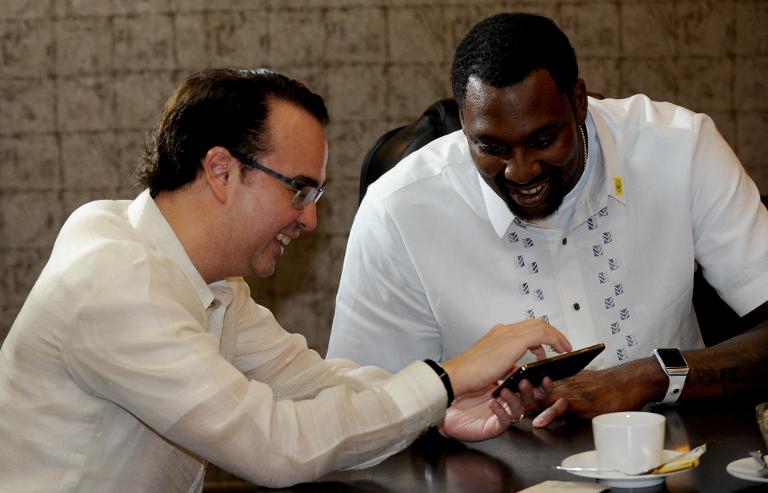 American NBA veteran Andray Blatche declared himself a proud Filipino on Monday as he enthused about his imminent naturalisation and “once in a lifetime” chance to play in the World Cup.

The 6-foot, 11-inch (2.11-metre) centre arrived in Manila over the weekend to meet his future compatriots on the Philippine basketball squad and quickly endeared himself to his hosts with his enthusiasm.

“I am very excited to play for the Philippines, and I thank everyone for making this once in a lifetime chance happen,” Blatche told AFP Monday as he met with members of the Philippine Senate, which last month passed a law that would grant him Filipino citizenship.

“I am Filipino now, so I will do my best to help my team.”

Philippine President Benigno Aquino still needs to endorse the law, but national coach Chot Reyes said this would likely happen before the June 30 FIBA deadline to submit the final list of players for the World Cup in Spain.

Reyes said Blatche — who averaged 11.2 points and 5.3 rebounds a game this season for the Nets — would be vital in helping the Asian minnows be at least competitive at the world championships.

“He will give inside presence with his size and he has that special skill set peculiar to a big guy — he has outside shooting ability and can put the ball on the floor,” Reyes said, but emphasised the American could not perform miracles.

“Our chances are slim to none, that’s as honest as I can make it, but we will be fighting with all our hearts,” Reyes said.

While Blatche decided to sign up for the Philippines for a chance to play in the World Cup, he said he had also been impressed by the deep love ordinary people in the former American colony have for basketball.

Immediately after arriving in Manila, Blatche spoke about children playing basketball in waist-deep waters during one of the many floods that afflict the impoverished and disaster-prone country.

“That means a lot. I would love to be part of a culture like that.”

Blatche also said he was impressed with his future teammates.

“They remind me of myself, live and breathe basketball,” he said. “That is something I stand behind. Something I want to have myself a part of.”

The Philippines will face Argentina, Greece, Croatia, Senegal and Puerto Rico in Group B in Spain.