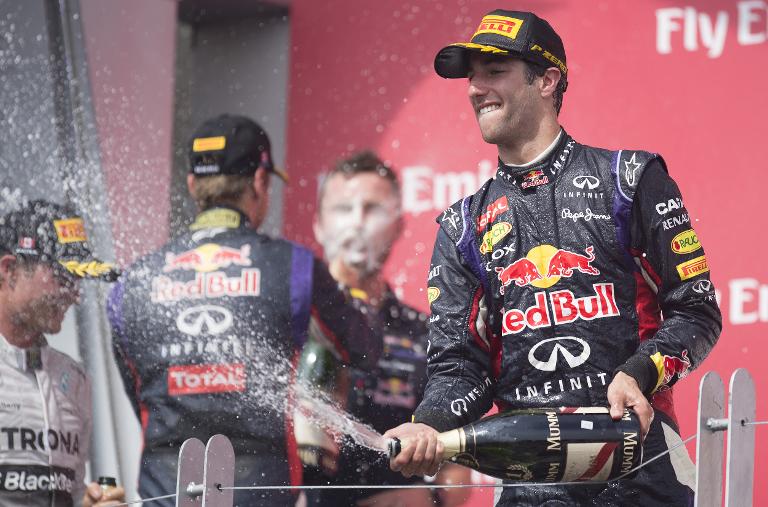 Daniel Ricciardo beamed from ear to ear on Sunday when he ended Mercedes early-season domination by claiming his maiden Formula One victory for Red Bull in a dramatic crash-hit Canadian Grand Prix.

The 24-year-old Australian took full advantage of power and electrical problems that hit both championship leader Nico Rosberg and his Mercedes team-mate Lewis Hamilton in the closing stages to claim a stirring triumph.

“I am still a bit in shock,” said Ricciardo. “Thanks everyone. This is ridiculous! There are lots of Australian flagsâ€¦ which is nice.

“The race really came to life for the last 15-20 lapsâ€¦ Hamilton had a problem and Rosberg was slow down the straights. I really struggled to get past (Sergio) Perez, but managed to do that and set my sights on Nico with a couple of laps to go.

“I finally managed to get in the right spot to use DRS — and it’s an amazing feeling right now.”

Ricciardo was close to a victory in his first race with Red Bull on home turf in Melbourne at the Australian Grand Prix in March, but after finishing second, he was disqualified for a technical infringement.

“We had a problem at the pit stop and thatâ€™s why I dropped behind,” said Rosberg. â€œThen I lost a lot of power in the straights, but it did not quite work out. I couldn’t hold off Daniel Ricciardo.”

Rosberg’s second place allowed him to open up a 22-point lead on Hamilton in the championship standings. Ricciardo is third 71 points behind the German.

The final lap was run behind a Safety Car after a horrifying high-speed collision between Mexican Sergio Perez of Force India and Brazilian Felipe Massa of Williams saw them fly off into the barriers.

Both were seen moving in their cockpits at the end of the 70-laps contest and appeared not to be seriously injured after the incident as the braked from speeds of more than 240 kph.

Ricciardoâ€™s win meant he has now beaten Vettel in the last five races, a feat that saw him receive well-deserved congratulations from his team-mate in the aftermath of a drama-laden event.

“Congratulations to Daniel,” said Vettel. â€œIt’s his day. We had a big help from Mercedes, unlike other weekends, but we were there to capitalise. It’s been a positive day.

“Daniel’s first win and a first win for Renault in the new era of engines. They have had a good comeback although there is still plenty of work ahead of us because Mercedes are quicker down the straight, but all in all it’s been a good day.”

“Amazing,” he said. “Daniel has been unbelievable all season. Of all races we thought we could win, this would have been the most unlikely, but the way he drove, he thoroughly deserved the drive.

“He’s proved his worth. He’s exceeded all expectations.”

Perez and Massa, whose impacts were measured at 27G, were placed 11th and 12th respectively at the finish. After the race, both were taken to the circuit medical centre for precautionary examinations.