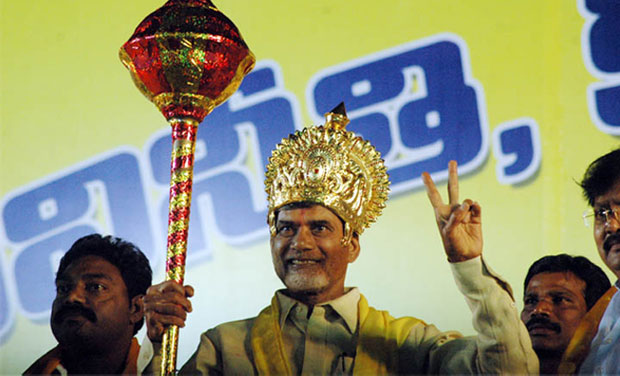 Vijayawada: Dedicating Telugu Desam Partyâ€™s victory in the elections to the Telugu people,Â “I will work as ‘Coolie No.1’ to rebuild the state into a Swarna (golden) Andhra Pradesh, a sunrise country and a knowledge hub. I will strive to make Andhra the No.1 state in the country with your participation and co-operation,” said the new Andhra Chief Minister, Chandra Bab Naidu.

TDP chief Naidu was on Sunday sworn in as the first chief minister of Andhra Pradesh post its bifurcation.

His Cabinet with 19 ministers, including three women, was also sworn in at the function. The first meeting of the Cabinet is scheduled to be held in the port city of Visakhapatnam although the date for it has not been fixed yet, Naidu said.Â

Krishna Murthy and Rajappa are tipped to be designated as Deputy Chief Ministers in keeping with the election promise made by Chandrababu Naidu.Â

Of the 19 ministers, two are from the SC community while seven belong to backward castes. Barring Kadapa, all remaining districts have been given representation in the Cabinet.Â

Yanamala and Kamineni Srinivas were the only ministers to take oath in English; the others all took their oath in Telugu.Â