Home Sports King of Clay proves it the ninth time 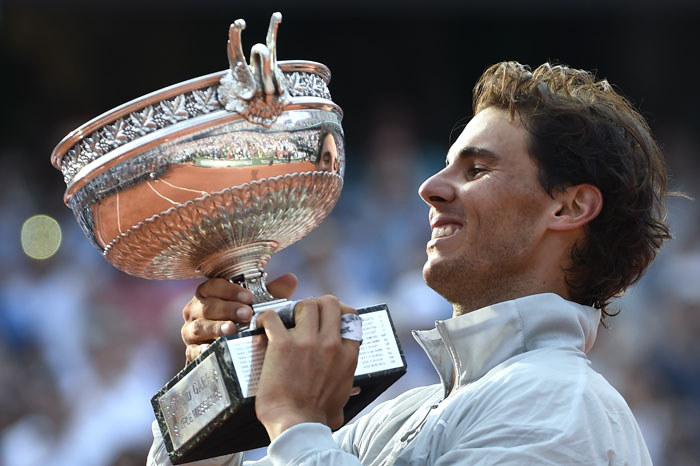 Paris: Rafael Nadal proved once again that he is the “King of Clay” by winning the title at Roland Garros for the ninth time on Sunday, and the fifth time in a row, by beating Novak Djokovic 3-6, 7-5, 6-2, 6-4 in the final.

Nadal improved his record at Roland Garros to 66-1, and stretched his winning streak at the clay-court major to 35 straight. He also became the first man to win the same Grand Slam title nine times.

Nadal has now won 14 Grand Slam singles titles: just three behind the career leader, his former archrival Roger Federer. And Nadal might already have 15 if he had not had a back problem in the final of this year’s Australian Open, where he was upset by the Swiss veteran Stan Wawrinka.

“It was a very hard moment, so today the tennis give me back what happened in Australia,” Nadal said in his postmatch remarks.
There were other hard moments on the road to Roland Garros, including an unprecedented three defeats in places he usually considers strongholds: the first to David Ferrer in Monte Carlo, the second to Nicolas Almagro in Barcelona and the third to Djokovic in the final in Rome last month.

“For me, playing here in Roland Garros is just unforgettable, forever,” Nadal said on court.

But it didn’t look too good at the start for the top-seeded Spaniard. Djokovic won the first set and looked to be in control of nearly every point. The combination of Nadal finding his range and the heat on court, however, started to take its toll on the second-seeded Serb.

Both players used ice-filled towels to cool themselves during changeovers, but Djokovic also looked like he vomited a bit as he was heading for the first changeover in the fourth set. Djokovic also appeared out of sorts in the third set. Trailing 3-0, he wobbled as he went to take his seat on the bench for the changeover. And in the final set, with Nadal leading 5-4, Djokovic poured cold water on his head and on each forearm in an effort to cool off.

Nadal was broken once in the first set, once in the second and once again in the fourth. He was able to recover the second two breaks, however, as he started to find his range on Court Philippe Chatrier, the stadium Nadal calls his favorite place in the world to play.

On match point, Djokovic double-faulted for the third time. Nadal dropped to his knees before shaking hands with Djokovic and then climbing into the crowd to celebrate with his team.

“Every moment is crucial now. All the points are so hard,” Nadal said. “Playing against Novak always is a big, big challenge for me.”