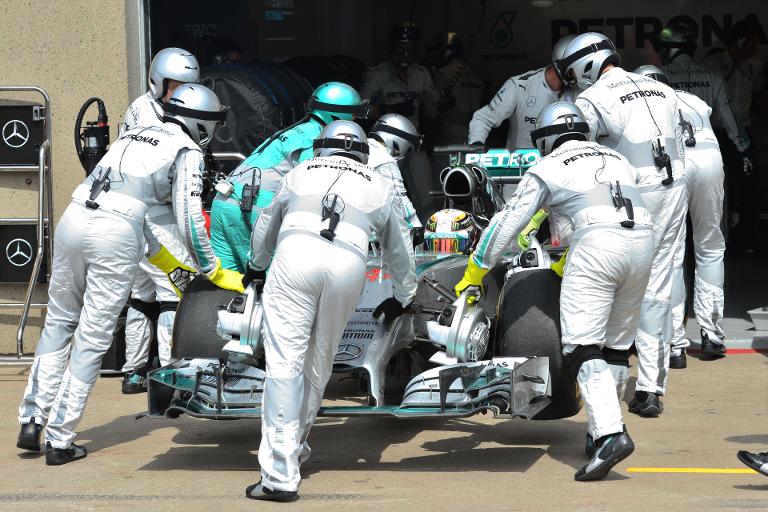 Lewis Hamilton cast aside his disappointment after being forced to retire from Sundayâ€™s Canadian Grand Prix and pledged to bounce back with another run of wins to regain the lead in this yearâ€™s championship.

“I have fallen behind before and I caught up, so I will just have to do it all over again,” he said, after a non-finish at the Circuit Gilles Villeneuve, normally one of his favourite venues, left him 22 points behind Mercedes team-mate German Nico Rosberg.

After seven of this yearâ€™s 19 races, Rosberg has collected two wins to Hamiltonâ€™s four, but the 29-year-old Britonâ€™s two non-finishes have cost him dearly.

“Naturally, for the team, I don’t want either car not to finish so hopefully we don’t have any issues on either car for the rest of the year,” added Hamilton.

“That obviously means I’ll have even more work to do to make up the lost ground, probably another four wins, and I’ll do what I can to get those.

“We’ve good tracks coming up and the one, for me, that I make sure I win at is Silverstone.â€

Silverstone is the venue for the British Grand Prix on July 6, but first the F1 circus has to return to Austria later this month and then, after Britain, head to Hockenheim for Rosberg and Mercedesâ€™ home German Grand Prix.

If Hamilton can recover lost ground over the next two races, the German event could be a key to the outcome of the season as the two rivals and erstwhile friends battle for glory in front of thousands of Mercedesâ€™ fans.

Hamilton was forced to retire after electrical and power problems, caused by overheating, led to a brakes failure. Rosberg suffered similar problems but managed to nurse his car home to finish second behind triumphant Australian Daniel Ricciardo of Red Bull, who claimed his maiden victory.

“I did the best I could out there and felt like I was having a strong race, but unfortunately it just wasn’t our day,” said Hamilton. “There was nothing I could do about our issues.

“We were managing the loss of power, but as soon as I finally made the jump on Nico in the second pit stop, my brakes failed. There are no emotions other than I couldn’t believe my car stopped and the other didn’t, but that’s the way it goes.

“Two DNFs (did not finish) is not helpful, but there’s a long, long way to go. I’ve caught up before, so I’ll catch up again. To not finish is disappointing, but there are plenty more races ahead of us this season so let’s hope for better fortune.”

Ricciardoâ€™s win brought an end to Mercedes run of successes and wrecked their hopes of a record sixth successive one-two finish.

Hamilton’s system shut down at the Turn 10 hairpin on lap 36 while just a few corners later, Rosberg met the same problems as he went through Turn One on lap 37.

Mercedes motorsport boss Toto Wolff said: “We had at exactly the same time a failure of the engine control systems, on the ERS, on the MGU-K, with a peak in temperature which was not on our priority list.

“But we were unaware they could have such a detrimental effect and the MGU-K just shut down and we could not reset it.”