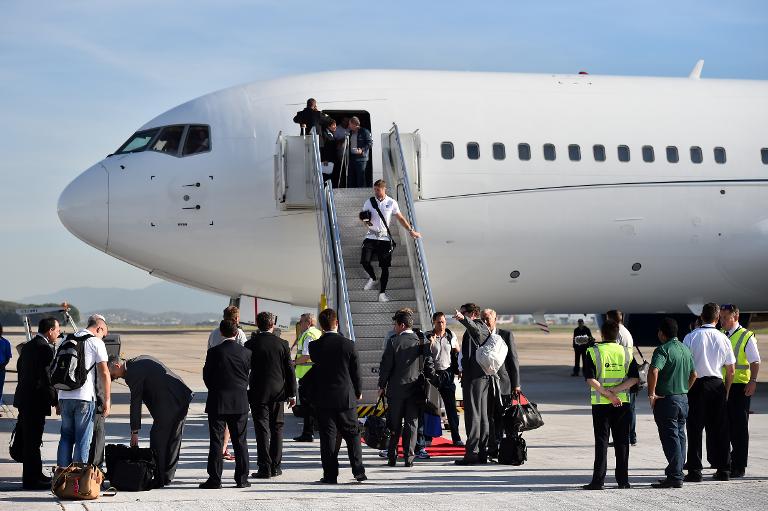 England touched down in Rio de Janeiro on Sunday to launch their World Cup campaign after escaping unscathed from a bruising final friendly against Honduras.

Germany were also amongst the 19 teams, including the hosts, to have their feet on Brazilian soil.

The Three Lions caught an overnight flight to Brazil after Saturday’s 0-0 draw in Miami, which was interrupted by lightning and also featured some stormy moments on the pitch, including two full-blooded challenges that got Honduras’ Brayan Beckeles sent off in the 66th minute.

“It doesn’t mean anything,” England manager Roy Hodgson said of the goalless draw as his squad arrived in Rio.

“The team is in good shape, we are all united and anxious for the first match against Italy,” he added in a statement released by FIFA.

England, who will be based in Rio’s upscale Sao Conrado district, play their opening Group D match against Italy in the Amazonian city of Manaus on June 14.

The rest of the 32 World Cup teams continue trickling in to their base camps ahead of the June 12 kick-off match between Brazil and Croatia.

Germany, Algeria, Russia and Greece also arrived in Brazil on Sunday, with Spain due in the evening.

Several hundred cheering people greeted Germany as they arrived at Santa Cruz Cabralia in the northeastern state of Bahia and boarded a boat to take them to Santo Andre and their specially built “Campo Bahia” base camp.

Fans waved Brazilian and German flags as the team, dressed in black suits, headed to their hotel, where they were also treated to a demonstration of capoeira martial art-style dancing.

“The expectations are high like every time a German team goes to a World Cup,” said coach Oliver Bierhoff.

“We came here to play a good tournament. We are among the favourites and of course Brazil are favourites too, because they will play at home.”

Russia’s manager Fabio Capello for his part complained it had been a long trip from Moscow to Sao Paulo.

“It was a long flight,” said the Italian.

“But after 14 hours on the plane we are happy to have arrived in Brazil. Everyone in our team is looking forward to the start of the FIFA World Cup.”

Russia, who are playing in their first finals since 2002, kick off against Group H rivals South Korea on June 18.

Greece also touched down in Sao Paulo, delayed a day from their originally scheduled arrival, and caught a connecting flight to Aracaju in the northeast ahead of their June 14 opener against Colombia.

“My feelings are that this World Cup will be a great success,” said coach Fernando Santos, whose squad will also face Japan and Ivory Coast in Group C.

“We have a real tight group in which all four teams have great chances. It will depend much on the game that we can develop.”

Algeria, who open their campaign against Belgium on June 17, arrived in Campinas, just outside Sao Paulo.

The Desert Foxes have vowed to turn around their World Cup record in Brazil. They last won a match at the tournament 32 years ago and have only scored once in two subsequent appearances.

African rivals Cameroon meanwhile delayed their arrival, originally scheduled for Sunday, after the players refused to board the plane because they were unhappy with their bonuses.

The players were demanding more than the 50 million CFA francs (76,000 euros, $104,000) they were offered by the government, a Cameroon Football Federation official told AFP.

After prolonged talks with the government, a deal was struck and the squad will depart later Sunday, the official said on condition of anonymity.

State broadcaster CRTV said the players would each receive six percent of the revenue generated by the federation during the World Cup, in addition to their cash bonuses.