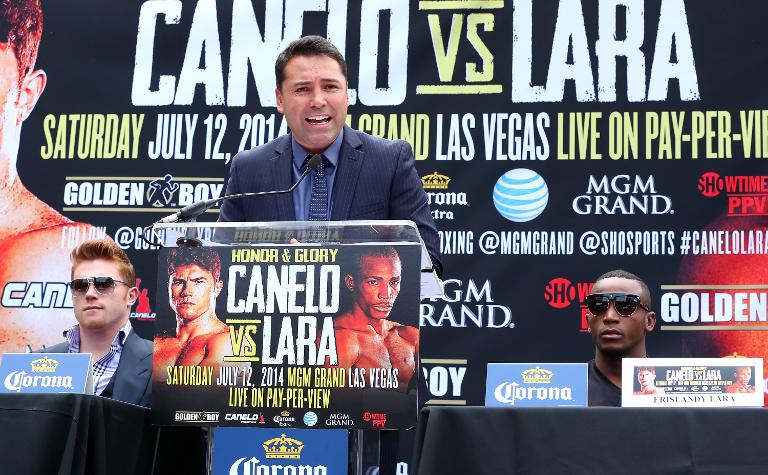 Ten-time boxing world champion Oscar de la Hoya was inducted into the International Boxing Hall of Fame, using the occasion to call for unity in the sport.

The 41-year-old Mexican-American earned his place in the boxing shrine with a professional career that included 10 world titles in six different weight divisions.

He turned pro after a sparkling amateur career that included an Olympic gold medal.

“Today marks an incredible personal achievement, but it is only the latest milestone that never would have been possible without my family, my friends and, most of all, my fans,” De la Hoya said at his induction ceremony on Sunday.

He went into the Hall as part of an All Star class that included rival Felix “Tito” Trinidad of Puerto Rico and undefeated Super Middleweight World Champion Joe Calzaghe of Wales.

Trinidad, 41, finished 42-3 with 35 knockouts, captured the International Boxing Federation welterweight title in his 20th pro fight and made 15 successful title defenses, 12 of them by knockouts. Among his victims were De la Hoya and Pernell Whitaker.

Trinidad took two world titles at light middleweight and in 2001 moved up to claim the World Boxing Association middleweight crown.

His only defeats came at the hands of Hopkins and in his final two fights, to Winky Wright and Jones.

De la Hoya’s last fight was in a December 2008 loss to Manny Pacquiao in which the Filipino ring icon stopped him in the eighth round.

By the time he officially announced his retirement in 2009, De la Hoya had already launched his Golden Boy Promotions, which he has built into a top promotional firm.

But in his role as a promoter De la Hoya has found himself at odds with such rivals as Bob Arum of Top Rank in a schism that has prevented some attractive bouts between fighters from the rival stables being made.

De la Hoya has recently extended an olive branch to Arum, but has suffered turmoil within his own firm that has resulted in the departure of longtime chief executive Richard Schaefer.

De La Hoya touched on numerous topics during his speech including the familial nature of boxing, his legendary matches with a cadre of superstars and the future of the sport.

“We must put aside the egos that have damaged our brand and sullied our reputation,” De la Hoya said. “We, the promoters, must stop carrying petty grudges that serve no purpose but to divide our sport. And most important, we must give the fans the fights that they want.”