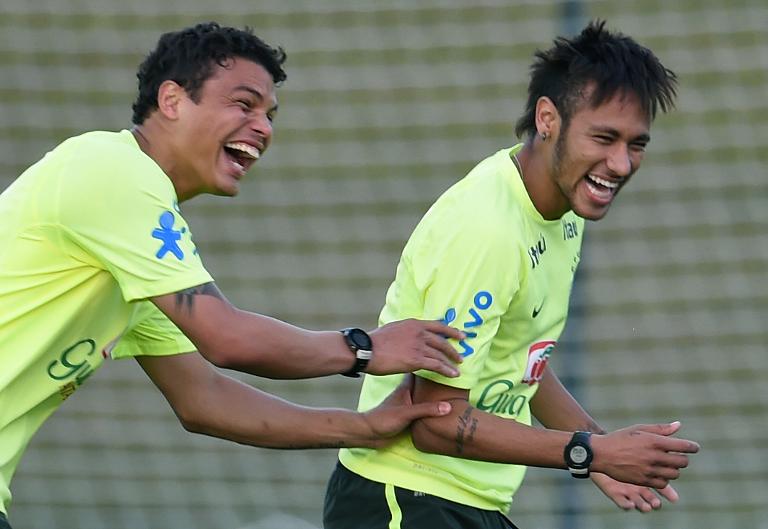 Brazil striker Fred says his team-mates have a simple game-plan if things don’t go their way during the World Cup: get the ball to Neymar.

The Brazilians got back to work at their plush Granja Comary training base in Terespolis on Sunday after a laboured 1-0 win over Serbia in Sao Paulo on Friday.

The match saw Brazil booed by pockets of fans, but the players trained with the enthusiastic backing of local fans on Sunday at their camp in the mountains above Rio de Janeiro.

The positive mood was reflected by Fred as he looked back at the host nation’s preparations with satisfaction.

“We have played two friendlies and had two wins. It’s been two very good weeks,” said the 30-year-old, recalling the 4-0 win against Panama in Goiania as well as the defeat of Serbia, earned thanks to his solitary goal.

“Mistakes were made but it was good they were made now so that we can correct and analyse them and find solutions in order to improve.

“We have a game on Thursday now and we need to prepare well. Everyone is confident,” he said referring to Brazil’s Group A opener against Croatia.

“We are now coming up to the competition. The players felt tired at the end of the friendlies because of the amount of hard work put in during training but we know the work has been well done.”

While Fred expressed delight at his emergence as an integral part of Luiz Felipe Scolari’s plans, the striker said he was in no doubt as to the identity of Brazil’s most important player.

“Everyone knows that the real star in our squad, the player who can make the difference, is Neymar,” said Fred.

“When things are going bad on a difficult day, we try to do everything to get the ball to Neymar.”

While Brazil is simmering with discontent over the $11 billion cost of the tournament, the town of Teresopolis has certainly caught World Cup fever.

National flags are draped from almost every building while murals depicting the stars of the Selecao are omnipresent.

But Brazil begin their quest to finally be crowned world champions on home soil in the less cosy environs of Sao Paulo.

There, Fred, the former Lyon striker now with Rio giants Fluminense, will hope to get among the goals again, although he would prefer to hear the crowd shouting his name this time.

Against Serbia on Friday, the Sao Paulo crowd evoked Luis Fabiano, a hero of their own, rather than Fred, the gangly striker who has become indispensable for his country since the return as coach of Scolari.

“The goal I scored was important, otherwise I wouldn’t be here giving an interview,” joked Fred, the top scorer at last year’s Confederations Cup with five goals.

“I always look to score goals, and I know that I need to be prepared to make my mark even if I only see the ball two or three times.

“Thanks to God, ‘Felipao’ took over the team and opted to play with a centre-forward. He showed confidence in me, asked me to move, open up spaces for Hulk and Neymar and push the opposition defence so that they score goals.”