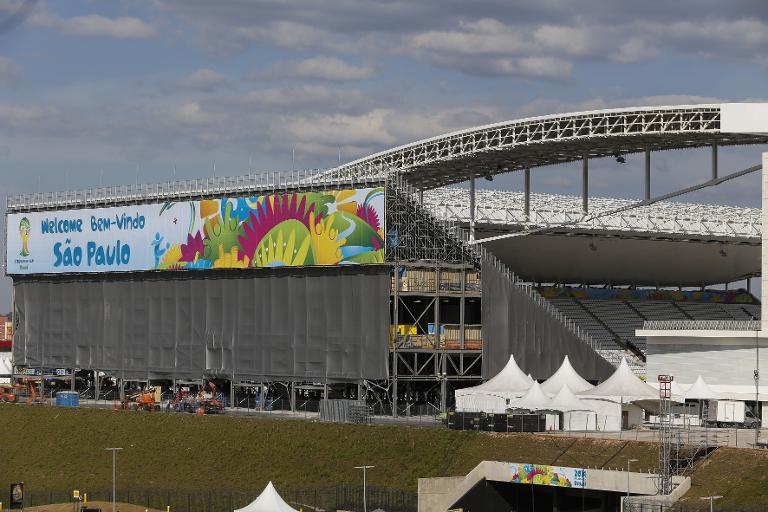 Brazilian workers are racing to complete the stadium that will host the World Cup’s first game, wiping seats, checking beams and installing wiring just days before the opening whistle.

As night fell on Saturday, helmeted workers were still toiling away on two long-delayed stands of Sao Paulo’s new Corinthians Arena where Brazil will take on Croatia on Thursday.

A worker sat on a beam as he reviewed the structure under the south-side stand, which is surrounded by a massive grey tarp.

In the back, two workers stood on a lift raised to the top of the stand, also appearing to review the structure.

Six others wiped sand from the white seats whose sturdiness was tested with sandbags.

The 61,600-capacity stadium has come to symbolize Brazil’s struggle to be ready on time for the World Cup as authorities scramble to finish five of the tournament’s 12 venues.

The original deadline was December 31, but preparations have been hit by chronic delays, cost overruns and construction accidents that killed eight workers, including three in Sao Paulo.

The Corinthians Arena has never been tested at full capacity due to the delays in the two temporary stands, which together will welcome a total of 20,000 fans.

Despite the last-minute effort, construction workers told AFP they were confident they would wrap up their work before Brazilian star Neymar and crew hit the field.

“There’s still much to do,” said one worker who spoke on condition of anonymity because he was not authorized to speak to the media.

Another used his sleeve to wipe sweat away from his forehead as he said: “It will be ready before the World Cup.”

His colleague was more bullish, predicting it would be done Tuesday.

The workers said they still have to finish installing electrical wires and carpeting but that the seats were ready.

The delays have contributed to the rising bill of hosting the World Cup, infuriating many Brazilians who have held protests demanding that President Dilma Rousseff spend the $11 billion on hospitals and education instead.

Corinthians officials say the venue will end up costing between $417 million and $431 million — or 14 to 18 percent over its original budget.

The stadium’s last test took place on June 1 in a 1-1 draw between Corinthians football club and Botafogo before a crowd of 37,119.

One of the temporary stands was left empty and the other was only half-full as firefighters had yet to give a safety clearance.

A spokesman for the subcontractor building the stands, Fast Engenharia, said the firefighters finally gave the green light on Friday and that all that was left was some “cleaning” to do.

But elsewhere in the stadium, several sofas were still wrapped in plastic in VIP booths.

A toilet seat was tipped over on the floor of an unfinished backroom.

In the corridors, several fridges for food stands and trash cans had yet to be unwrapped, while workers outside were assembling sponsor stands.

But a FIFA official voiced confidence the stadium would be ready in time.

“The capacity for opening match will be 61,600,” the official said. “The final touches are applied, the media center opened.”