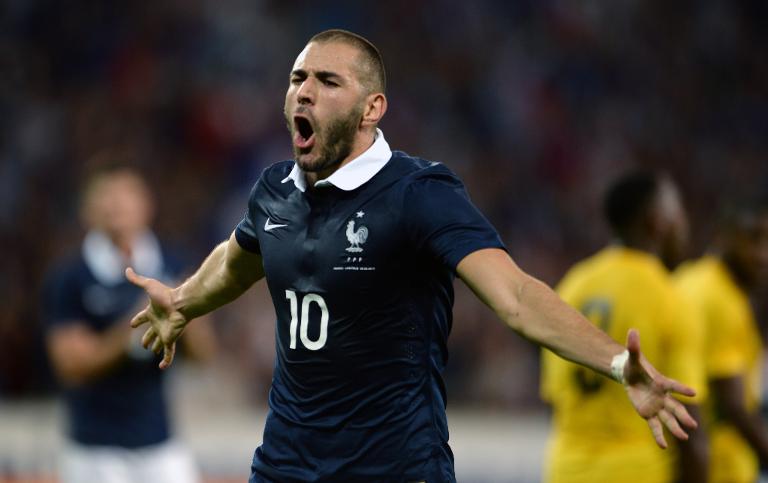 Karim Benzema hit two spectacular goals as France romped to an 8-0 victory over Jamaica in a bid to ease the blow of losing star striker Franck Ribery for the World Cup.

While Jamaica barely put up any serious opposition, the result was a welcome boost for Didier Deschamps’ team two days after being rocked by Ribery’s withdrawal with a back injury.

“Ribery is a loss, but we have to stop talking about it and get on without him,” said Paris St Germain’s Matuidi, who scored his first brace for France.

Coach Deschamps insisted that France remained united even without star Bayern Munich striker Ribery, who said that leaving the squad was like “a death in my soul.”

“We have lost a world class player,” said Deschamps. “The French team is stronger with him when he is at 100%, but there are other players. They form a collective.”

“A victory was what we needed before leaving. It gives us confidence,” added Real Madrid’s Benzema. “Everyone is happy. We showed a lot of good things.”

Benzema and Matuidi scored a goal in each half of the festive farewell to their French fans before heading to Brazil on Monday. France play their first World Cup Group E game next Sunday against Honduras, who held England 0-0 on Saturday.

Benzema’s first goal was a curling shot from the corner of the penalty area. The second was another shot from the edge of the area past hapless Jamaica goalkeeper Jacomeno Barrett.

Benzema also hit the post and made a goal for Matuidi and Arsenal’s Olivier Giroud.

Griezmann, a rival to Giroud for Ribery’s place, came on as a second half substitute and scored twice in 12 minutes. Yohan Cabaye opened the score in the 17th minute.

France are now unbeaten in five games and looked strong.

“We know that it is going to be a different kind of match next Sunday, but it was good to finish like that. It gives us confidence,” said Matuidi.

For Deschamps, the match was a last opportunity to try Benzema, roaming more freely, with Giroud up front in place of Ribery.

“I wanted to see them together again, but it is not just about them,” said Deschamps. It was also important to see how the pair worked with France’s midfield, he added. But Deschamps acknowledged that Benzema and Giroud look in “excellent physical condition.”

Giroud clearly feels that he will be first choice to link up with Benzema in the Brazil campaign. “I am going to be playing in my first World Cup — and in Brazil,” he said. “I am like a kid at Christmas.”

The only worry for France was left back Mathieu Debuchy’s exit at half-time. “It was a blow to the back of the thigh. He struggled to finished the first half,” said the coach. “I didn’t want to take any risks. There is no real worry.”

Southampton’s Morgan Schneiderlin, called into the squad after injuries to Ribery and midfielder Clement Grenier, came on for the final three minutes to gain his first cap.