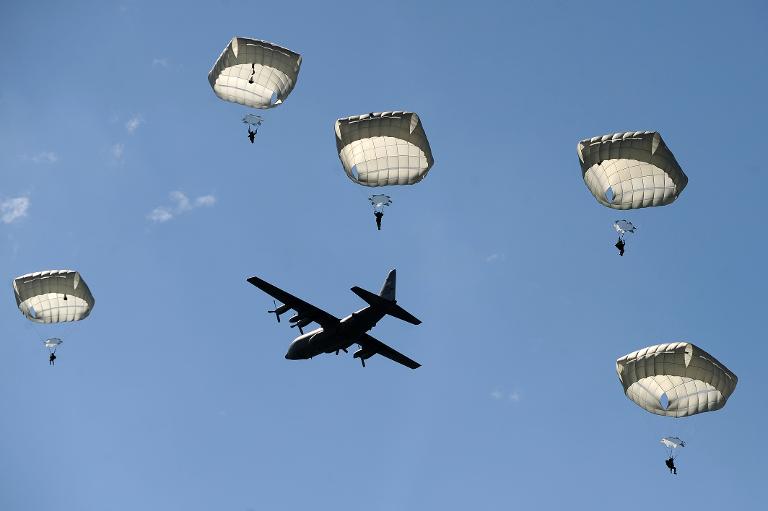 Nearly 900 European and American military parachutists filled the skies above Normandy on Sunday to commemorate the 70th anniversary of the D-Day landings.

A large crowd watched as parachutists from France, the United States, Germany, Belgium, Britain, Poland, the Czech Republic and Italy jumped over the town of Sainte-Mere-Eglise, which played a major part in the Normandy landings during World War II.

“It was the easiest jumping I’ve ever done, smooth landing, no wind… I am very proud,” said US lieutenant Patrick Coe, 23, who took part in the event.

Overnight on June 5 and 6, 1944, around 13,500 Americans on board 800 planes were parachuted into France around Saint-Mere-Eglise.

Another 4,400 soldiers were transported by more than 300 gliders, Stephane Lamache, historian at the town’s Airborne Museum, said.

One of those watching on was 93-year-old veteran Warren Wilt, who took part in the landings and who laughingly told AFP that he wanted to parachute on Sunday.

“I am disgusted, I should be with them,” he joked.

The conditions were very different in 1944.

Another veteran Bud Rice, 93, piloted a plane with 20 soldiers on board. “There was a terrible fog, I was scared of a collision,” he said.

The French government was represented by Bernard Cazeneuve, the interior minister, who called it “a great event”.

Saint-Mere-Eglise was one of the first towns liberated during the invasion. It was identified by the Allies as a key location to capture to thwart any German counterattack.

Sunday’s parachute jump marked the culmination of a weekend of events to commemorate the D-Day anniversary.

Events will continue to mark the fighting that followed the Normandy landings, as it took the Allies another 100 days to liberate the liberate the region from the Nazis.