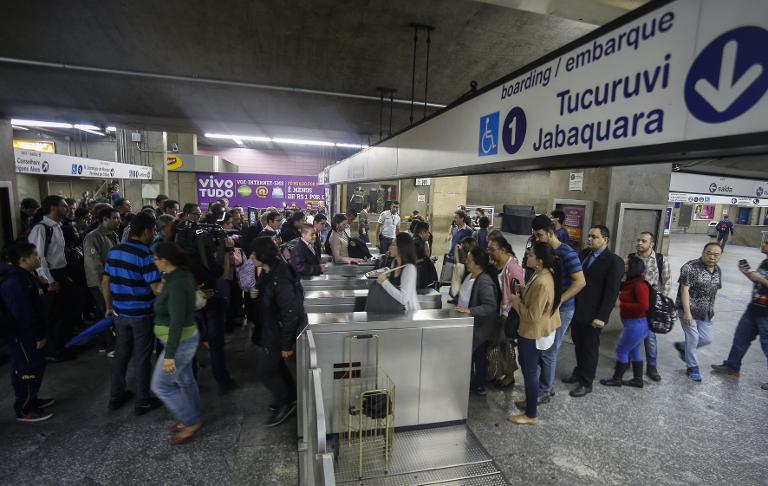 A court on Sunday ordered Sao Paulo subway workers to pay a daily fine if they continue a strike threatening to disrupt the World Cup’s opening game in Brazil’s biggest city.

The subway workers’ union said it would vote whether to continue a strike that has caused traffic chaos, as the city’s host stadium prepares to welcome more than 60,000 fans for Thursday’s Brazil-Croatia game.

The ruling came as more teams arrived in Brazil, with Germany greeted by several hundred people at its northeastern base and England landing in the picturesque city of Rio de Janeiro.

Eighteen of the 32 teams are now on the ground, including the hosts, but the chaos gripping Sao Paulo — the latest in a wave of strikes and protests ahead of the tournament — has distracted the usually passionate footballing nation from the World Cup build-up.

The strike over wage demands is the latest social upheaval to hit Brazil, where protesters angry at the World Cup’s $11-billion bill have staged demonstrations.

The five-line subway system has been partially operating, but trains were not arriving at the Corinthians Arena that will host the opening game.

Union workers have reduced an initial demand for a 16.5-percent wage hike to 12.2 percent, but employers are offering only 8.7 percent.

The subway standoff led to a clash Friday between picketing strikers and police inside a metro station, with authorities swinging truncheons and firing tear gas to disperse the protesters.

Authorities are hard-pressed to resolve the latest labor dispute to avoid another embarrassing incident in a World Cup hit by delays, cost overruns and protests even before it has started.

The 61,600-capacity Corinthians Arena has itself been plagued by delays, and construction workers were racing against the clock over the weekend to finish it before the opening whistle.

“There’s still much to do,” said one construction worker, who spoke on condition of anonymity because he was not authorized to speak to the media.

Another used his sleeve to wipe sweat from his forehead as he said: “It will be ready before the World Cup.”

Delays at five of the 12 host stadiums have contributed to the rising bill of hosting the tournament, infuriating many Brazilians who have held protests demanding President Dilma Rousseff spend the money on hospitals and education instead.

Rousseff charged Friday that there was a “systematic campaign” against the World Cup and her government ahead of October 5 elections in which she is seeking re-election.

A leftist political prisoner during the 1964-1985 military dictatorship, she said that even in the darkest days of regime abuses, “we did not confuse the World Cup with politics.”

The president insists the money spent on the tournament will leave a legacy of modernized airports and transport infrastructure that will benefit Brazil for years to come.

But much of the other promised train and road infrastructure has been shelved, and the original deadline to finish the stadiums — December 31 — was repeatedly pushed back because of construction delays.

Last year’s Confederations Cup, a World Cup dress rehearsal, saw more than a million people take to the streets, but this year’s demonstrations have been smaller.