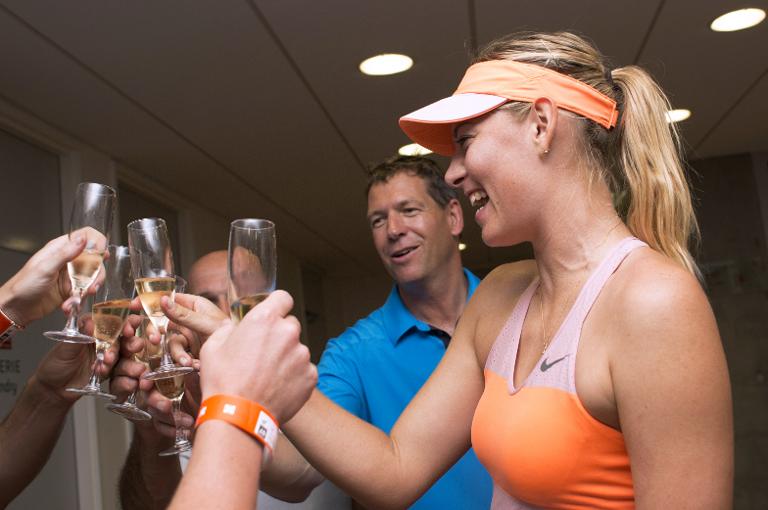 Maria Sharapova’s second French Open title on the claycourts of Roland Garros on Saturday left her scratching her head as to how she ever got to that point in her career.

Reared on the hardcourts of Russia and Florida, and happiest on the green grass of Wimbledon, the biggest name in women’s sport is a late convert to the joys of the slippy red surface.

She once described her early outings on clay as being akin to a “cow on ice”, but since her thrilling 6-4, 6-7 (5/7) 6-4 win over Romania’s Simona Halep in the finest Paris final in many a year, she is now a claycourt legend.

Asked at her post-match press conference if she found it bizarre that it had turned out that way, Sharapova replied: “I’m with you on that one.

“If somebody had told me that I’d have more Roland Garros titles than any other Grand Slam, I’d probably go get drunk. Or tell them to get drunk, one or the other.

“It’s really amazing. I feel that I worked to get to this position. There’s nothing else.

“You’re not just born being a natural clayâ€‘court player. Okay, maybe if you’re (Rafael) Nadal. But certainly not me. I didn’t grow up on it, didn’t play on it. I just took it upon myself to make myself better on it.

“There is no one else that was going to do that for me. I had to do the work.”

Hard work and sacrifice is something that the Russian superstar has never shied away from since leaving her mother country and her mother at the age nine to further her career in the tennis heartlands of Florida.

Her precocious first Grand Slam victory as a 17-year-old at Wimbledon 2004, was quickly followed up by a US Open win when she was still a teenager in 2006.

World number one status and her Australian Open win at the start of 2008 helped make her one of the most marketable names in sport – men or women.

But while the global acclaim remained, her form dipped as a shoulder injury sidelined her for long periods.

It was her first French Open title in 2012 — which made her just the seventh woman in the Open era, which started in 1968, to win all four Grand Slam titles during her career — that marked Sharapova’s return to the top.

Saturday’s win – her fifth Grand Slam title, taking her level with Martina Hingis at joint 11th on the all-time list — now has a special place in her mind

“It’s incredible to be sitting here 10 years after my first Grand Slam win, and to think that I now have five,” she said.

“You know, at that stage you’re 17 years old (at Wimbledon 2004), and of course you think it was a great tournament, obviously. Can I do that again? Can I win more majors? You always have those question marks,” she said.

“So to sit here 10 years later and have five under my belt and to keep going, it’s quite emotional. I mean, I’m still a bit speechless about the victory today.”

Sharapova feels that at just 27 she has several more years of being competitive at the top level.

Asked if her second French Open triumph was what she had wanted most in life at this moment she replied: “When I’m in Paris, of course.

“When I’m in London (for Wimbledon), no. When I’m in Paris, absolutely.”