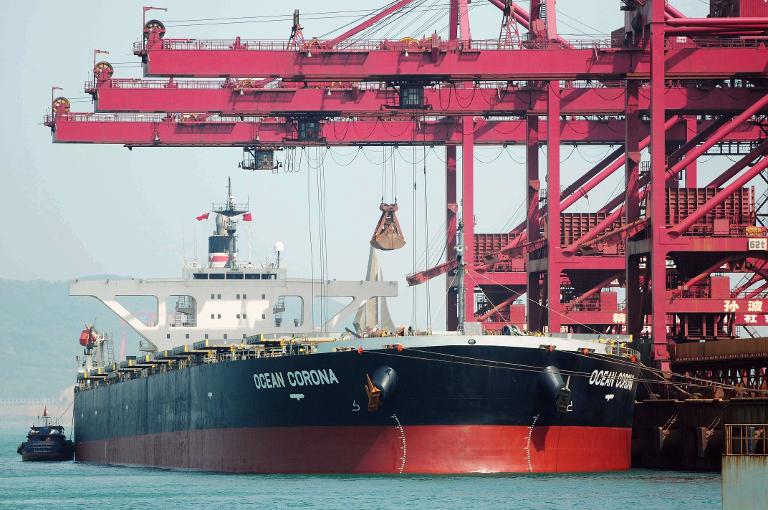 Exports increased 7 percent to $195.47 billion year-on-year, while imports declined 1.6 percent to $159.55 billion, resulting in a trade surplus of $35.92 billion, the General Administration of Customs announced.

It represented a 74.9 percent jump from the same month last year.

The figure, China’s third straight monthly surplus, also surpassed the median forecast of a surplus of $23.4 billion in a survey of 15 economists by Dow Jones.

Exports, which sharply outpaced April’s 0.9 percent gain, were in line with the median prediction of a 7.2 percent rise, while imports missed their forecast of a 6.0 percent increase.

Liu Li-Gang and Zhou Hao, economists at ANZ Bank, attributed the drop in imports to a recent crackdown by Chinese regulators on the use of commodities as collateral to finance deals.

But they noted: “As the import growth weakened, the trade surplus widened substantially … suggesting that the RMB appreciation pressure remains over the foreseeable future.”

Beijing is under pressure from the US and other countries to allow its yuan currency, also known as the renminbi (RMB), to rise in value. Chinese exporters worry that persistent yuan strength hurts their sales by making their products more expensive overseas.

The mixed trade results came as worries over China’s growth outlook have increased this year after a series of generally weaker-than-expected statistics, though trade data distortions have partially clouded the situation.

China’s gross domestic product (GDP) grew 7.4 percent in the first three months of 2014, weaker than the 7.7 percent recorded in October-December last year and the worst since a similar 7.4 percent expansion in the third quarter of 2012.

The country’s trade statistics this year have been erratic, with Beijing reporting an unexpected trade deficit of almost $23 billion in February, which authorities blamed on the Lunar New Year holiday season. That was China’s first monthly deficit in 11 months.

In March, China’s trade volumes fell dramatically in a development that analysts blamed on the continued impact of fake over-reporting of exports seen in early 2013.

In a sign of optimism for China’s economy, the country’s manufacturing sector has shown renewed vigour recently, with key surveys indicating an improving situation.

The National Bureau of Statistics announced a week ago that the official purchasing managers’ index (PMI) rose to 50.8 in May from 50.4 in April, the third straight month of improvement and a five-month high.

And, on Tuesday, British banking giant HSBC released a private PMI survey that showed it came in at 49.4, the highest reading since January’s 49.5.

Both indexes are closely watched indicators of the health of the economy. A reading above 50 indicates expansion.

China’s leaders say they want to transform the country’s growth model to make consumer spending and other forms of private demand the key drivers of the economy.

The new model would steer the Chinese economy away from an over-reliance on huge and often wasteful investment projects that have girded decades of past expansion.

Such a makeover is expected to result in slower but more sustainable growth in the long run.

The World Bank on Friday said it expects China’s economic growth to moderate over the next few years, with GDP expansion to slow to 7.6 percent this year.