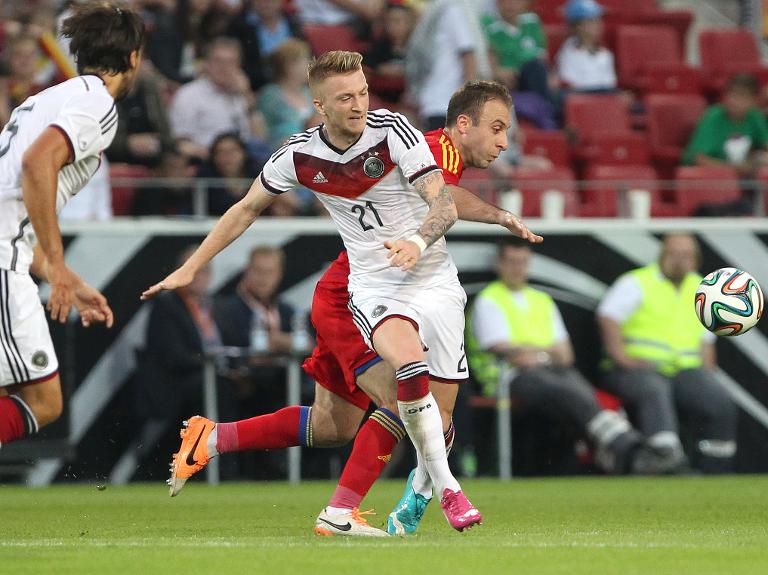 Germany suffered a major blow ahead of the World Cup on Saturday as an ankle injury ruled midfielder Marco Reus out of the tournament, the German Federation announced.

The 25-year-old Borussia Dortmund star, known as ‘Rolls Reus’ and scorer of seven goals in 21 appearances for Germany, suffered a slight tear to ankle ligaments shortly before half-time in Friday’s 6-1 friendly win over Armenia.

He was helped off the pitch by two of the medical staff and taken to hospital in Mainz where scans revealed the damage.

“Marco is obviously very disappointed to miss the World Cup and also for us it is a real blow,” said German coach Joachim Loew.

“When we learnt last night (Friday) that the injury was to the ligament we knew his chances of going to the World Cup were over.”

Loew called up the 22-year-old central defender Shkodran Mustafi, capped just once and who plays for Serie A side Sampdoria.

Reus’s withdrawal is a serious blow to Loew as he had been in superb form towards the end of the season, scoring eight goals and creating five in the last nine games of the Bundesliga season.

Reus is the latest big star to see his World Cup hopes dashed because of injury.

Colombia’s talismanic striker Radamel Falcao, France winger Franck Ribery and Italian midfielder and AC Milan skipper Riccardo Montolivo have all been ruled out in the past week.

Mustafi, who had a spell at English Premier League side Everton before joining Sampdoria, had been left out of the original 23-man squad named by Loew last Monday following a 2-2 draw in the friendly with Cameroon.

“We are taking someone (Mustafi) who was with us at the training camp (in Italy) with us and who is into the rhythm of the squad,” said Loew.

“As regards filling Reus’s position on the pitch we are blessed with numbers as we have (Thomas) Mueller, (Mario) Goetze, (Lukas) Podolski, (Andre) Schuerrle and (Julian) Draxler.

“We felt that the defence is more likely to pick up suspensions through yellow and red cards so hence we opted for Mustafi.”

The German squad fly out to Brazil later on Saturday.

They have been drawn in a tough group, Group G, which sees them begin their campaign on June 16 against Cristiano Ronaldo-led Portugal.

2010 World Cup quarter-finalists Ghana and the United States, coached by former German handler Jurgen Klinsmann, make up the rest of the group.