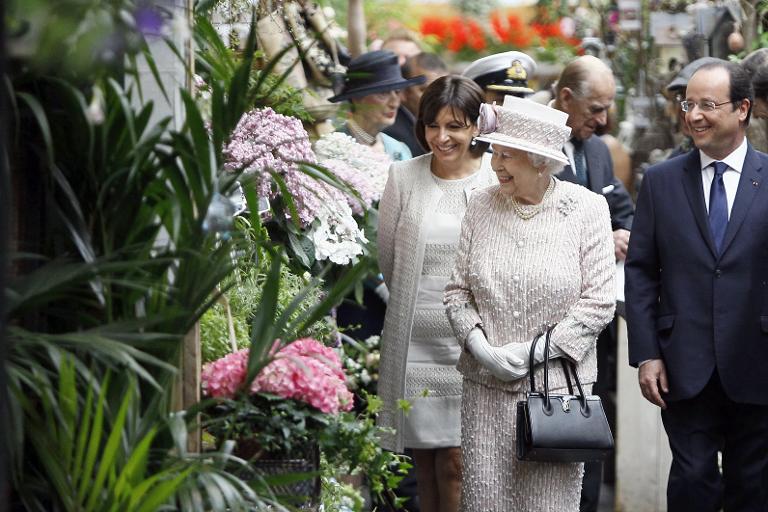 The star draw at D-Day commemorations in France attended by an A-list of world leaders, the 88-year-old monarch permanently secured her place in the French capital following a moving ceremony in the heart of a city she is said to be extremely fond of.

Although located near the emblematic Notre Dame cathedral, and more ominously the Conciergerie — where French queen Marie-Antoinette was imprisoned before being guillotined following the 1789 French Revolution — the mood of the hundreds strong crowd around the market seemed anything but republican.

As the queen and Prince Philip entered the picturesque market in the historic Ile de La Cite district accompanied by French President Francois Hollande and Paris mayor Anne Hidalgo, an immense cheer rose from the crowd.

“We chopped up the head of our king but she is our queen by proxy,” said Aymeric Juranicks, a Parisian in his forties.

“She is dearly loved in France because she is simple and not standoffish,” said Linda Messine, a French pensioner seeing the queen for the very first time.

Before coming to the market, the queen — who wore a light pink dress and matching hat — first went to Paris’s city hall where she was welcomed by mayor Hidalgo to the strain of bagpipes.

She then crossed across the Seine to rename the “flower market” as it was earlier known. It was one of the places she visited during her first trip to France in 1948.

She was a princess then, recently married to Philip and pregnant with Charles. The queen recalled that trip at a state banquet Friday speaking of the enormous pleasure she felt at visiting “this beautiful country”.

After briefly being shown around the square around the market — which boasts lovely metal pavilions and dates back to the early 19th century — Hidalgo lauded the queen as a dearly loved figure in France.

“We know of your Majesty’s fondness for Paris,” Hidalgo said. “You have secured the affection of the French …. and Parisians.”

She said the renaming of the market was a sign of France’s gratitude for the role of the British in helping liberate the country during World War II.

“Parisians today bow to you and say a heartfelt thank you,” Hidalgo said, amid rousing cries of “Long live the Queen” in French.

The queen walked around the square adjoining the market, speaking to injured French and British soldiers who had cycled in from Brussels the night before to raise money for charity to rehabilitate wounded war veterans.

She was then serenaded by a band from the Paris Conservatory, which struck up a lilting ‘Lil Darling’ — a jazz tune made popular by Count Basie. The queen’s childhood nickname was Lilibet.

Earlier as she toured the market, the band played a range of classics including Fly me to the Moon, Summertime and On the Sunny Side of the Street, apparently amongst the royal favourites.

At the end of her walkabout, the queen unveiled a plaque to mark her visit as well as a street sign bearing the market’s new name.

As she left, the crowd was still reeling under the royal magic, with many conscious that it would probably be the last time they saw her in person.

“She’s always done us proud, our Queen. God bless her.”

But the renaming drew condemnation from some quarters.

“Paris is honouring the Queen of England and has not yet honoured any figures from the French Revolution, like Robespierre,” said Simonnet.

French president FranÃ§ois Hollande saluted the “courage of the Red army” during a commemorative speech marking the 70th anniversary of D-Day on June 6, 2014. Duration: 00:57