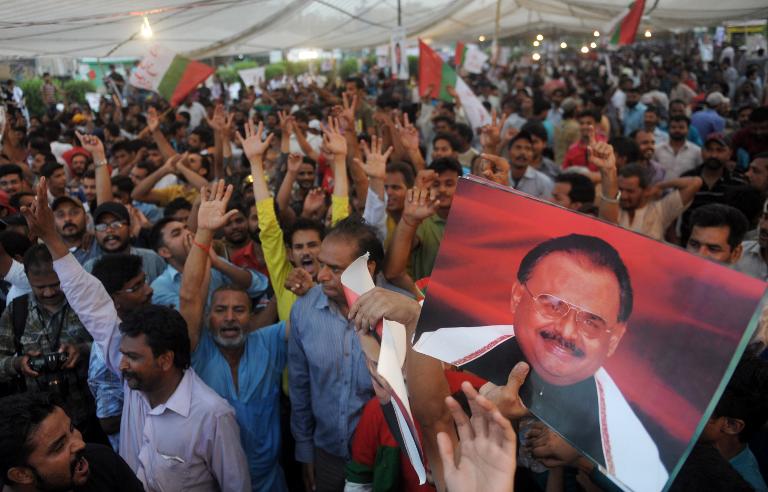 Thousands of supporters of the exiled leader of Pakistan’s MQM party ended a four-day protest Saturday after he was bailed by London police following his arrest on suspicion of money laundering.

Altaf Hussain was arrested at his suburban home in the British capital on Tuesday, prompting street demonstrations in Karachi — Pakistan’s biggest city and his party’s power base.

“The 60-year-old man arrested on Tuesday 3 June on suspicion of money laundering has been released on police bail to a date in July pending further enquiries,” a police statement said.

A police source indicated the man was Hussain.

More than 2,000 party workers and supporters danced, embraced one another and distributed sweets in Karachi after hearing the news, a AFP reporter witnessed.

Hussain’s arrest had sparked major protesters which included the torching of at least a dozen vehicles while the Karachi Stock Exchange plunged three percent on the back of the news.

“I salute those who participated in the sit-in protest against my arrest,” Hussain told supporters by telephone from London.

Hussain left Pakistan for Britain in 1992 after a military operation to end ethnic unrest in Karachi, going on to gain British citizenship in 2002.

He said Saturday that he had complete trust in the British judicial system and vowed to “keep speaking the truth till my last breath”.

Hussain founded the MQM in 1984 in response to the marginalisation of Mohajirs — migrants who fled India amid the violence of the sub-continent’s partition.

They are mainly concentrated in the cities of the southern Sindh province, especially Karachi where they form a majority of the city’s population of 20 million.

But he remains a highly influential figure in Karachi, Pakistan’s economic centre and main port, wielding effective control over the city from his London home and addressing supporters using a loudspeaker linked to his telephone.

Hussain is revered by his fiercely loyal supporters while his critics accuse him of running his party as a violent, mafia-like organisation.

Following his arrest, he was allowed to attend a pre-arranged medical appointment on Tuesday and was kept in hospital until Thursday.

British police raided his London residence in 2012 and 2013 over money-laundering claims.

Two other men were arrested over the allegations in December last year and have been bailed until September pending further investigations.