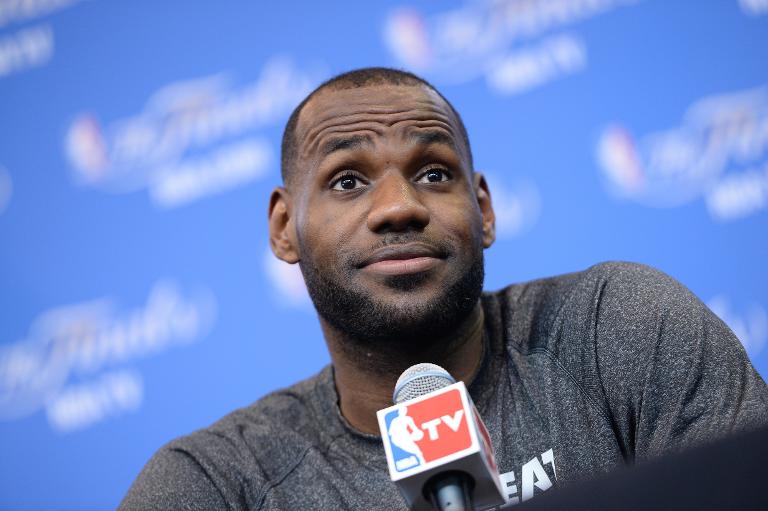 For the first three rounds of the playoffs, LeBron James ran roughshod over the competition, barging through defences like child’s play and picking up field goals like they were on sale at bargain prices.

So the Miami Heat was shocked when the two-time reigning NBA finals Most Valuable Player was immobilized by leg cramps and unable to even take a baby step forward late in the fourth quarter of Thursday’s tightly-contested game one of the finals.

“It felt like a punch in the gut when you see your leader limping like that back to the bench,” said Heat coach Erik Spoelstra.

James was still feeling the effects of the leg cramps when he met with reporters Friday, after doctors treated his dehydration and cramping with intravenous drips.

“I am pretty sore right now from the muscle spasms,” said James, but he insisted he will be fine for Sunday’s game two.

“I got two and a half bags of IV last night. So obviously I got no sleep.”

The top-seeded San Antonio Spurs took a 1-0 lead in the best-of-seven series by beating the two-time reigning champion Heat 110-95 on Thursday.

But all the talk Friday was about the failed air conditioning system, which caused temperatures to soar to more than 30 degrees Celsius (90 Fahrenheit) inside the AT&T Center.

That created huge difficulties for the players, especially James, who has had a career-long problem with staying hydrated in sweltering temperatures.

“It was extreme conditions. I never played an NBA game like that with the heat. I looked in stands and saw every last fan with a fan waving it, and I knew this was something different,” James said.

“I sweat a lot… This used to happen to me a lot in high school. I (have) been tested for it.”

James has taken some flack in social media circles over the incident.

Fans using the hashtag #Lebroning posted pictures of themselves on Twitter pretending to have leg cramps.

And American sports drink company Gatorade Co. mocked him on their twitter feed, though they later apologized

Gatorade is the official sports drink of the NBA since 1984, but James endorses their competitor Powerade.

Gatorade deleted the tweets Friday and said it was sorry.

“We got caught up in the heat of the battle. As a longtime partner of the Miami Heat, we support the entire team,” Gatorade said in a statement.

Spoelstra said James is one of those rare athletes who can push himself to Herculean heights. But the flip side is that James has no off switch allowing him to dial it back when his body starts to fail him.

“Ninety-nine percent of people have never pushed themselves to that level where the tank is empty and the body shuts down,” Spoelstra said. “In hindsight I could have rested him more. But how realistic is that in a finals environment?

“Last night was so extreme. He was burning through his fluids and calories at an extraordinary rate.

“It was like trying to play a NBA basketball game in a hot yoga environment.”

This is not the first time James has struggled with dehydration problems in an NBA finals game. He was also hogtied by cramps in game four of the 2012 finals against Oklahoma City.

“The doctors say just continue to hydrate,” said James, who picked up three assists Thursday to become the third player in NBA history to total 1,000 assists, 4,000 points and 1,000 rebounds over his playoff career, joining Kobe Bryant and Michael Jordan.

“It hasn’t happened a lot in my (NBA) career. It just so happens it happened in the NBA finals twice, and we all remember that.”

The Spurs announced Friday that the air conditioners have been repaired, and everything will be back to normal for game two.

San Antonio coach Gregg Popovich said he admires James’ skill but would rather see him cooling off on the Miami bench Sunday rather than scorching the Spurs’ defence.

“All I know is that I saw all the air conditioner people in the hallways on my way out (Thursday night), and I sent them all home,” Popovich said Friday during the Spurs practice.