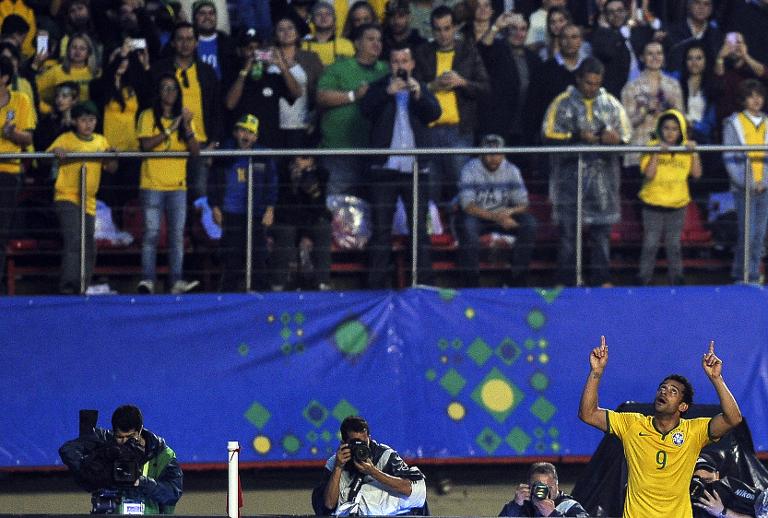 Brazil coach Luiz Felipe Scolari shrugged off complaints from a restless home crowd as his team wrapped up their World Cup preparations with a 1-0 win over Serbia on Friday.

A second-half goal from centre-forward Fred secured an unconvincing win for Brazil, who were subjected to boos and catcalls by sections of their support as they struggled to break down the Serbians.

Scolari brushed off the restive reaction of the Sao Paulo crowd after the win, saying his team had got used to being booed by fans.

“There were some (boos) in Goiania as well,” he said, referring to Brazil’s friendly win over Panama this week.

“They have appeared elsewhere too when we have played 10 or 15 minutes below what we are capable of.

A crowd of 67,042 saw Fluminense striker Fred slide an effort home despite being grounded after a challenge to end stubborn resistance by the Serbians, who kept Brazil starlet Neymar in check throughout.

The visitors took to the pitch wearing shirts bearing the legend “Serbia needs Help” after heaving flooding in May left some 50 preople dead.

But it was Brazil who were floundering early on as they took time to find their rhythm.

As midfielder Oscar admitted afterwards to Globo TV: “It was tough. Serbia played very well and people will now hope things go better against Croatia. I am sure they will.”

The first chance fell to the Serbians, with Manchester City star Aleksandr Kolarov getting the better of Barcelona fullback Dani Alves before firing in an effort just off target.

Fans swiftly grew impatient and some started to demand Scolari turn to former striker Luis Fabiano, now 33 and not in the squad though he has managed a goal every other game in 45 appearances.

With just six days to go before they begin their quest for a sixth World Cup title — but first at home after their failure against Uruguay in 1950 — Brazil showed signs of sluggishness.

Their previous outing had been a 4-0 romp Tuesday over a hapless Panama side in the provincial city of Goiania.

But Friday, in a city beset by traffic chaos owing to the second day of a metro strike, was a taller order against a muscular Serbian side, who were little troubled in the opening period.

Scolari has not selected Fabiano — Fred is his unquestioned favorite at centre forward.

But the coach who led Brazil to the 2002 trophy did not shrink from making four changes midway through the second half and six in all.

He hauled off Paulinho, Daniel Alves, Marcelo and even Fred eventually to give some game time to Fernandinho, Maicon, Maxwell and Jo.

As he had promised beforehand he gave Neymar, who missed a large chunk of the end of the season with Barcelona through injury, the full 90 minutes.

However, the striker appeared preoccupied with not suffering any pre-Cup knocks and featured little.

Scolari played Oscar at the start despite giving him camp leave ahead of the birth of his first child in midweek, meaning Chelsea teammate Willian had to warm the bench for the opening period before entering the fray.

Dortmund’s Milos Jojic almost bagged an equalizer but his header 18 minutes from the end struck the woodwork.