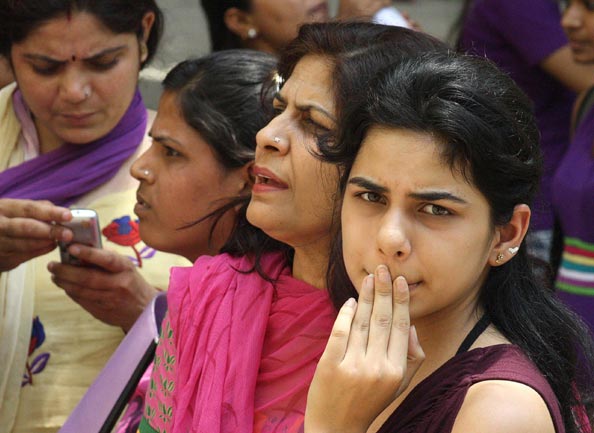 New Delhi: In spite of the glitch on a first day, Delhi University online admission forms have been a hit â€“ 68,000 admission seekers filled the forms online.

Apart from this, DU Students’ Union (DUSU) put up helpdesk to entertain queries of aspirants, which received an overwhelming response. Students from across the country are thronging the helpdesk at the district library to get DU offline forms and to find out the names of colleges where they could do the honours course in their favourite subjects.

Online facility also helps students to avoid the scorching heat. An admission seeker, Hiya Sahariah who is an ex-student of Delhi Public School, said, “I want to take honours in mathematics. The helpdesk was a great help.” Â

A continuous drop in selling of offline form was witnessed till fifth day, but selling of online forms is continuous at a good pace, according to official data, about 240,000 (online and offline) forms have been sold by the varsity till the fifth day.

Starting Monday, 68,827 students have registered online and made payment for the optical mark registration (OMR) forms. On the fifth day, 10,621 offline forms were received from 18 different centres across Delhi. The admission process to DU began Monday June 2 and ends June 16. DU is conducting admission for 54,000 seats in 61 colleges.

Among the 61 colleges under Delhi University, St Stephenâ€™s and Shri Ram College of Commerce (SRCC) are most sought after. St. Stephenâ€™s is Delhiâ€™s oldest college which was set up in 1881 and among top five colleges in the country. St. Stephenâ€™s is known for its two courses i.e. English (Hon.) and Economics (Hon.) for which most of the applicant apply here.

Shri Ram College of Commerce (SRCC) is known for its alumni and campus placements. It undergoes two faculties, Commerce and Economics, but it is famous for Bachelor of Commerce (Hon.) and the cut-offs for this course touches sky high. Last year the first cut-off was 99% and admissions were closed at 97%, this time much higher cut-offs are expected.Â