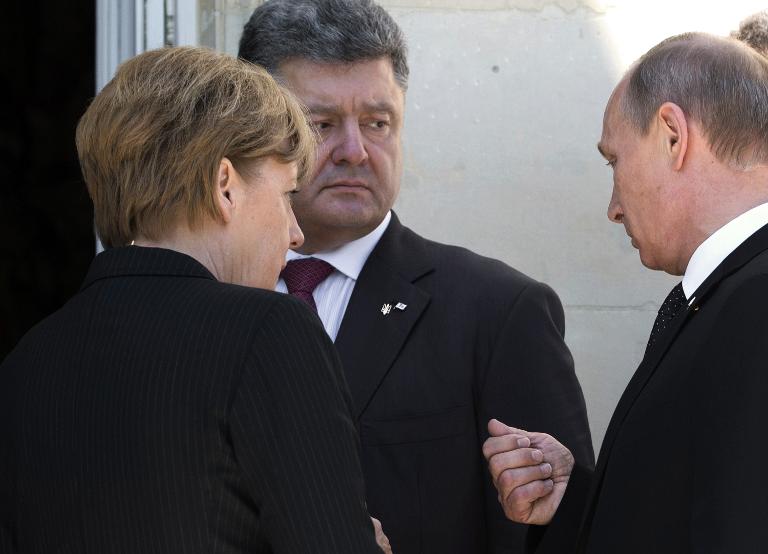 Russia and Ukraine appeared to have made a long-awaited breakthrough in efforts to resolve a damaging crisis in their relations after conciliatory talks on the sidelines of Friday’s D-Day anniversary ceremonies.

Vladimir Putin and Ukrainian president-elect Petro Poroshenko embraced the spirit of the day that signalled the end of World War II by announcing they would jointly seek a ceasefire in the conflict between government forces and pro-Russian rebels in southeastern Ukraine.

The two leaders shook hands and talked for a quarter of an hour in a meeting brokered by French President Francois Hollande before a lunch of world leaders attending the D-Day events.

A series of positive commentaries on the encounter followed from both Kiev and Moscow, raising hopes of a peaceful de-escalation of a crisis that erupted when Russia annexed Crimea in March and sparked a damaging chill in its relations with western powers.

The rift with the West looked to be healing too as Putin had his first face-to-face encounter with US President Barack Obama. US officials styled the meeting as an informal chat but Putin portrayed them as “substantial” discussions.

Putin told Russian TV that Poroshenko had the “right approach” to ending the crisis while the Ukrainian president-elect, who is due to be inaugurated on Saturday, said he believed there was a “good chance” of a successful dialogue with Moscow.

Putin revealed that the two countries were close to a deal on the vexed issue of Russian gas supplies to its former Soviet partner.

Russia has been accused of holding Ukraine to ransom as a result of energy giant Gazprom’s doubling of the price of gas it supplies to the country and its demand for a rapid settlement of arrears.

Putin’s spokesman Dmitry Peskov said the two men had urged “the soonest possible end to bloodshed in southeastern Ukraine, and to military operations on both sides — both by the Ukrainian armed forces and by supporters of the federalisation of Ukraine.

“They also confirmed that there was no alternative to resolving the situation with peaceful political methods.”

It was the first meeting between the two leaders since pro-Western chocolate tycoon Poroshenko won Ukraine’s presidential election on May 25.

Russia indicated it would send an ambassador to Kiev for Poroshenko’s investiture in what will be seen as de facto recognition of the new president’s legitimacy.

A ceasefire could be harder to deliver as, for it to be accepted by the rebels, there would have to be some sort of pullback by Ukrainian government forces which Kiev would regard as an infringement of its right to police all of its sovereign territory as it sees fit.

Tensions in southeastern Ukraine have mounted in recent days with the government admitting on Thursday that it had lost control of three border posts that were being routinely attacked by the rebels.

On Friday, one police officer was killed and two others injured in a mortar attack in Slavyansk, the epicentre of rebel activity in the region.

Elsewhere a Ukrainian plane was shot down as fighting continued in the east of the country, amid signs the government was losing control of parts of its border with Russia.

The Russian president has repeatedly emphasised that he does not control the rebels while the Western powers accuse Moscow of pulling their strings.

According to French Foreign Minister Laurent Fabius, Putin admitted he could have a “certain influence but not total influence” over events in Ukraine.

If there is a ceasefire and a significant de-escalation of the crisis, it will be a major coup for Hollande and the gastro-diplomacy that has brought Putin in from the cold.

Friday’s deal was done before a slap-up meal of John Dory fish, veal and pear and caramel biscuits. On Thursday evening, the Socialist leader had to race through a dinner with Obama at a French restaurant so that he could meet Putin for a late supper at his Elysee palace.