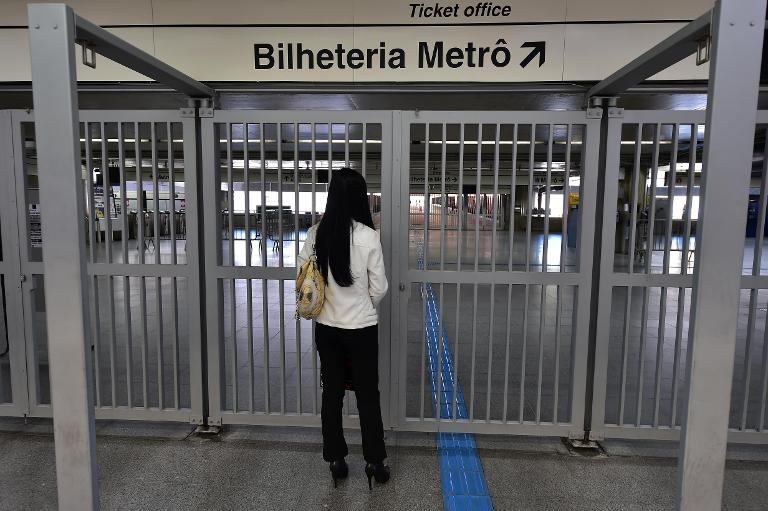 A subway strike snarling Brazil’s biggest city before the World Cup entered a third day Saturday as President Dilma Rousseff denounced a “systematic campaign” against her government and the tournament.

Some roads were congested in Sao Paulo and commuters fumed in long bus lines in the latest labor upheaval to hit Brazil with just five days until the mega-city hosts the opening game.

Police, teachers and bus drivers have also staged strikes in other cities in recent months to demand better wages, while protestors angry at the World Cup’s $11 billion bill have staged demonstrations.

The subway standoff led to a clash Friday between picketing strikers and police inside a metro station, with authorities swinging truncheons and firing tear gas to disperse the protesters.

Officials are bracing for potential protests during the tournament, fearing a repeat of the violent demonstrations that marred the Confederations Cup last year.

Rousseff hit back at critics late Friday, charging that there was a movement to derail her Workers Party (PT) before October 5 general elections.

She said criticism of government spending on the tournament — notably stadiums in some host cities with no football tradition — amounted to “disinformation.”

The president did not say who was behind the campaign but she recalled a 2011 edition of conservative news magazine Veja that sardonically suggested the tournament’s 12 stadiums would not be ready for decades.

Rousseff, who was a leftist political prisoner during the 1964-1985 military dictatorship, said that even then “we did not confuse the World Cup with politics.”

Rousseff has insisted that the money spent on the tournament will leave a legacy of airports and transport infrastructure that will benefit Brazil for years to come.

But much of the other promised train and road infrastructure has been shelved while several of the 12 stadiums have yet to be finished.

The president’s popularity has taken a hit, with an opinion poll Friday showing that her support for the October election dropped to 34 percent in June from 37 percent in April.

She still led the pack of candidates, however, with her main rival, social democrat Aecio Neves, falling by one point to 19 percent.

“It’s not the Cup that’s messing up the country. It’s been like this since Don Pedro arrived,” he said, referring to Portuguese explorer Pedro Alvares Cabral, who discovered Brazil in 1500. “Someone is always robbing the country.”

Three of the five subway lines were partially operating, while trains were not arriving at the station for the Corinthians Arena, which will host Thursday’s opening game between Brazil and Croatia.

A subway union official, Rogerio Malaquias, told AFP that up to 95 percent of employees support the strike, which continued after negotiations on a pay hike collapsed late Friday.

A court will rule Friday on the strike’s legality.

“As long as there is momentum, the movement will continue and could continue until the World Cup,” Malaquias warned.