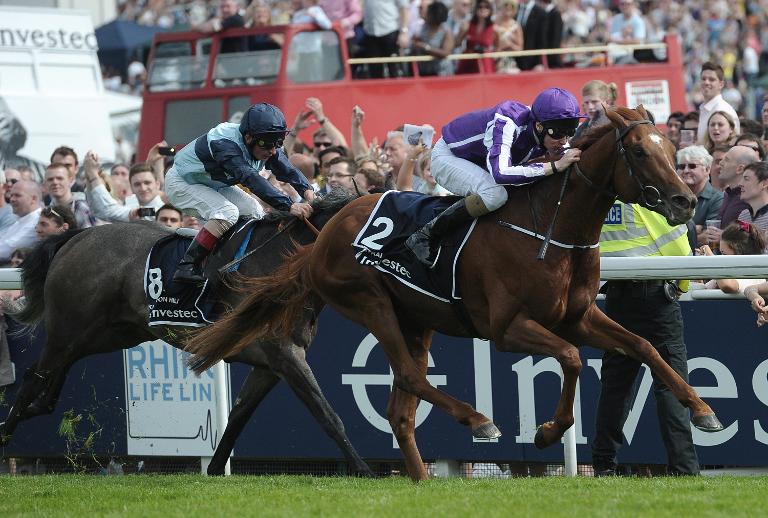 Australia, ridden by O’Brien’s 21-year-old son Joseph, repelled a late challenge by Kingston Hill (15/2) to take the honours at 11/8 while Romsdal was third at 20/1.

Australia, O’Brien’s fifth winner in the race considered the ‘blue riband of the turf’, follows Camelot and Ruler of the World in giving the Irish trainer his hat-trick.

O’Brien as ever refused to take the accolades as his alone not even the record making him change his habit of sharing it with the team from the stables in County Tipperary.

“We’re in a privileged position to have such horses,” said O’Brien, who had said in May that Australia was the best horse he had ever prepared for the Derby including his sire Galileo who won in 2001.

“We said what we thought was always the case that he was very special. He showed it today.

“Joseph gave him a great ride.”

O’Brien junior was in no doubt how good a horse Australia was.

“Horses don’t come better than this one. He is the best I have ridden,” said Joseph O’Brien, who rode Camelot to victory in 2012.

Two of the winners four owners Michael Tabor and Sue Magnier also became the most successful owners in the race’s history with six wins.

“When I was a young lad this achievement in becoming the most successful owner in Derby history would not even have been a distant dream,” said Tabor.

“You don’t think that far ahead,” added the former bookmaker.

For the winner’s breeder Lord Derby, the race being named in honour of his family, it was a moment of pure joy as he became the first member of his family to breed the winner since the 1933 champion Hyperion.

“It has been so long since we bred the winner that I can’t believe this has happened,” said Lord Derby, whose extraordinary racemare and winner of the 2004 Oaks Ouija Board is the dam of Australia.

In a bizarre twist another of the winning horse’s owners Derrick Smith’s son Paul was owner of the runner-up but delighted with his runner’s performance.

“My father might have got the bragging rights but I am more than happy with the way my horse performed,” he said.

“It was a great performance,” added Smith, whose star will next race in the Irish Derby, according to trainer Roger Varian.

O’Brien’s Kingfisher and wide outsider Our Channel had set the pace from the off with the fancied True Story up close under 49-year-old Kieren Fallon and Kingston Hill keeping a close eye on proceedings.

However, Fallon’s mount faded coming down Tattenham Corner and swinging into the straight to meet the judge.

O’Brien was, however, going ominously well on Australia and although Andrea Altzeni, enjoying a marvellous first ride in the Derby, produced Kingston Hill to take command off the two pacemakers it was only a matter of time before the Irish champion came to challenge.

He duly did with two furlongs to run and the duo battled it out until Australia put some space between himself and Kingston Hill.

Altzeni, though, found more in his horse and he came back at Australia, but O’Brien also found reserves and he safely negotiated the final few hundred yards to take the prize.

Romsdal under champion jockey Richard Hughes stayed on well for third to give Friday’s Oaks winning trainer John Gosden another reason to flash one of his broad grins.

“He ran a great race and we will aim him at the St Leger in September,” said Gosden, who won the Derby with Benny the Dip in 1997.