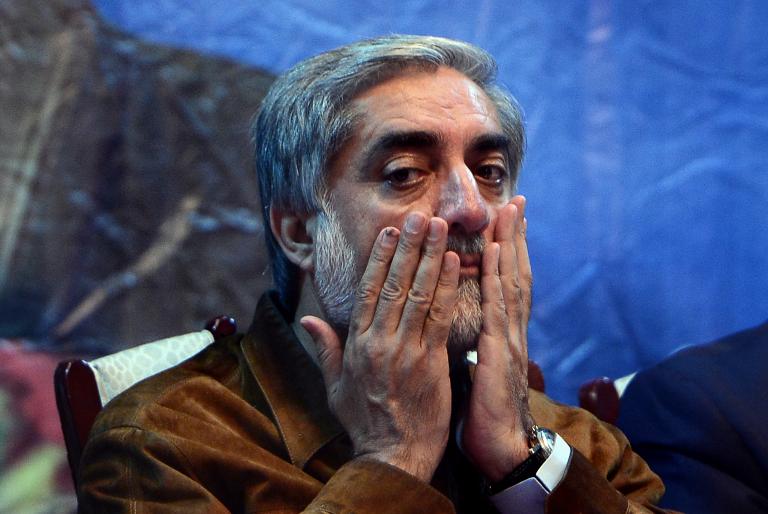 “The first attack was a suicide car bomb on a convoy of Dr. Abdullah Abdullah and the second was a mine attack,” Sayed Gul Agha Hashemi, head of Kabul police’s criminal investigation branch, told AFP.

Abdullah said he was unhurt, but at least six people were killed and 22 others wounded, according to the interior ministry.

The UN Security Council condemned the attack calling for an orderly transition to a new government.

“The members of the Security Council underlined their support for Afghanistan’s democratic processes, and looked forward to the second round of the presidential election and the continued orderly transition to a new administration,” they said in a statement.

Blood was splattered near one vehicle in the convoy which was badly charred, while medics carried a body away on a stretcher.

The blast site was cordoned off by security officials as ambulances rushed to the scene and took the wounded to hospital, making their way through a sandstorm in the capital.

“A few minutes ago, when we left a campaign rally our convoy was hit by a mine,” Abdullah told supporters at an election rally, in quotes broadcast on Afghan television.

The blast occurred soon after Abdullah left the rally at the city’s Ariana hotel. Some witnesses in the area reported hearing two ear-splitting explosions.

The assassination attempt came ahead of the second round of the presidential election on June 14, which Taliban insurgents have threatened to disrupt.

No one has so far claimed responsibility for the attack.

Afghanistan is voting to choose a successor to President Hamid Karzai, who has ruled since the fall of the 1996-2001 Taliban regime.

Abdullah fell short of the 50 percent threshold needed for an outright victory in April’s first round and will face former World Bank economist Ashraf Ghani in the run-off.

Marie Harf, deputy spokeswoman at the US State Department, condemned the attack.

“As we’ve made very clear, the Afghan people deserve democracy — which they’ll be exercising next week — not violence,” she said.

Ghani and Karzai also condemned the attempt on Abdullah’s life, with Ghani calling it “the act of the enemies of Afghanistan to disrupt the democratic process in the country”.

The US insisted that Afghan security forces would be able to provide tight security for next week’s run-off.

“We’re hopeful that the second round will be transparent, inclusive and credible,” Harf told reporters.

“The security forces can work again with the electoral bodies… very closely to provide security as they carry out this second round, and I think have probably learned a few lessons about security from the first round.”

Late last month President Barack Obama outlined the US strategy to end America’s longest war, saying that the 32,000-strong US deployment in Afghanistan would be scaled back to around 9,800 by the start of 2015.

But the drawdown relies on Afghanistan signing a long-delayed Bilateral Security Agreement laying out the terms of the US military presence in the country after this year.

Outgoing Karzai refuses to sign the pact, but both Afghan presidential candidates have vowed to sign it if elected.