Home World US jobs gains solid in May 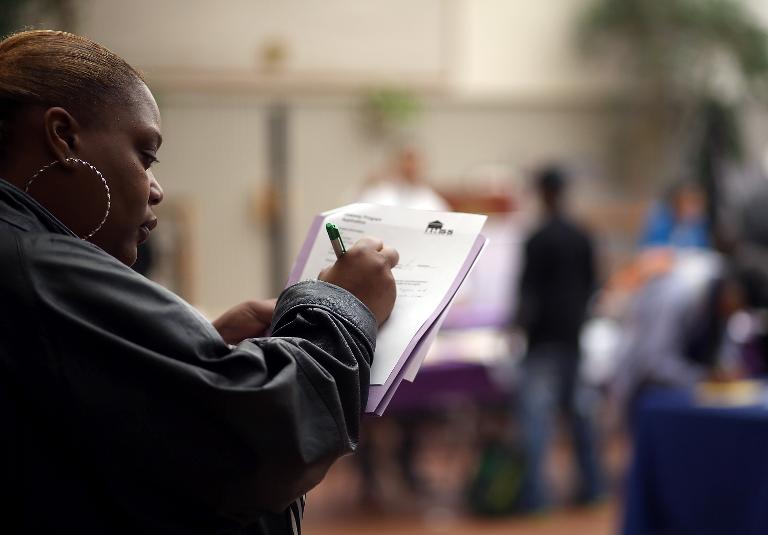 US employers created more than 200,000 jobs for the fourth straight month in May, showing the country can still muster solid growth despite the weakness in Europe and other regions.

The US economy added a net 217,000 positions last month, nearly all from private companies, the Labor Department reported Friday.

It took the total number of working Americans to a new high, surmounting for the first time all of the 8.7 million jobs lost during the Great Recession of 2008-2009.

But there was still no progress in reducing the very low 62.8 percent rate of participation in the workforce, demonstrating that the economy still has far to go to reach full employment. The participation rate was 66 percent on the eve of the recession.

And the unemployment rate stood unchanged at 6.3 percent, after having fallen sharply from 6.7 percent in April mainly due to data showing a large number of people leaving the workforce.

Some 9.8 million people remained on the jobless rolls, slightly up from April, though 1.9 million fewer than a year ago.

Even so, economists said the May numbers were strong enough to suggest that the economy is picking up speed after the 1.0 percent contraction of the first quarter of the year.

Some predicted even stronger job creation numbers in the second half of the year.

“This is a solid report, marking four straight gains over 200,000; that hasn’t happened for more than 14 years,” said Ian Shepherdson of Pantheon Macroeconomics.

The report “continues to show a mostly positive picture of the labor market with the economy adding jobs at a considerably more rapid pace than it had earlier in the recovery,” said Dean Baker, co-director of the Center for Economic and Policy Research in Washington.

Encouraging was a fall in the number of people forced to work part-time because they could not find full-time jobs, and a slight uptick in wages during the month.

Almost all of the May gains were in the private sector, with governments at all levels adding only a net 1,000 workers.

The biggest chunk of new jobs came in the health care and social assistance sector, where almost 55 million positions were added.

The leisure and hospitality sector picked up 39,000 jobs, suggesting Americans are beginning to loosen their pocketbooks and spend on dining, entertainment and holidays.

The trade and transport sectors also added about 39,000 payrolls, another sign of a general pickup in economic activity.

But the construction sector, which economists have hoped would carry the economy forward, remained relatively weak, adding just 6,000 jobs.

Moody’s Analytics pointed out that surpassing the pre-recession high for the number of people employed, to reach 138.5 million in May, was still only a modest achievement, given that the population grew by 14 million in the past six years.

“The labor market would need to create twice as many jobs to accommodate the growth in the working-age population, even at the current low labor force participation rate,” it said.

Moody’s economists noted as well that wage growth remained weak, and that with many of the new jobs being created in low-wage sectors, people who have dropped out of the jobs market have little incentive to return.

Moody’s however predicted the economy and job creation will pick up pace in the second half of the year to an average 260,000 jobs a month, with higher hiring in government and in the housing industry key to achieving that.