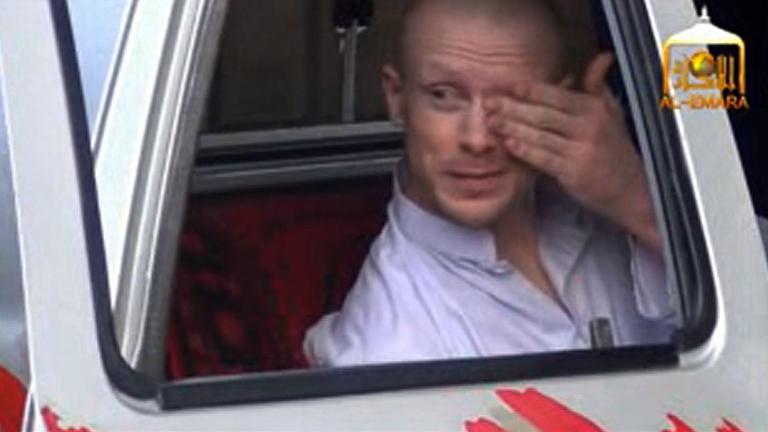 President Barack Obama vehemently refused to apologise for doing a prisoner trade with the Taliban to free a US soldier, despite a fierce political storm over the deal in Washington.

Critics, both Republican and Democratic, have asked whether the transfer of five Taliban prisoners from Guantanamo Bay for the release of US Army Sergeant Bowe Bergdahl was even legal, and question both the price paid and the principle of a swap.

But Obama, asked about the row raging in Washington at the G7 summit in Brussels was unapologetic, repeating that he had a duty as commander-in-chief to get Bergdahl home.

“We have a basic principle, we do not leave anybody wearing the American uniform behind,” Obama said, adding that he had acted last week because the health of Bergdahl, held captive for nearly five years was deteriorating.

“We saw an opportunity and we seized it and I make no apologies for that.”

– ‘Not a political football’ –

The president also defended his decision to announce Bergdahl’s release in a televised appearance in the White House Rose Garden with the soldier’s parents at his side.

“This is not a political football — you had a couple of parents whose kid volunteered to fight in a distant land, who they hadn’t seen in five years,” Obama said on Thursday.

“I make absolutely no apologies for making sure that we get back a young man to his parents and that the American people understand this is somebody’s child.”

Some of the president’s critics have warned that Obama, already burdened by a series of crises, has sunk deeper into political quicksand by negotiating with the Taliban, keeping Congress in the dark or manufacturing a military success story in order to mask other scandals.

Senate Intelligence Committee chair Dianne Feinstein, a Democrat, has even accused Obama of breaking US law by failing to provide lawmakers 30 days’ notice before transferring prisoners out of Guantanamo.

The White House has offered several explanations for acting without congressional notification to recover Bergdahl.

At first, it argued his health and safety were in immediate jeopardy.

Later, it said a delay would interfere with the president’s constitutional function of protecting Americans.

On Thursday, a senior US official embroidered the tale even further, saying that a video showing Bergdahl appearing in poor health in January added extra urgency to the bid to free him.

The official said it was not possible to divulge contents of a classified briefing for senators, but did say they were told that Bergdahl’s recovery and his life would be in danger “if the detainee exchange proceedings were disclosed or derailed.”

A Senate aide told AFP meanwhile that the government had “obtained credible information that, if anything about the swap became public, Bergdahl would be killed.”

Complicating the defence of the swap are the questionable circumstances of Bergdahl’s capture, with some soldiers accusing the 28-year-old of desertion and the US military announcing it will investigate whether he should be disciplined.

“It doesn’t look good,” Senator Joe Manchin winced on Wednesday ahead of a classified briefing for all 100 senators in which officials provided details on the exchange.

Hillary Clinton says in her soon-to-be-published memoir that she had sought the release of Bergdahl, but recognised that negotiating with his Taliban captors would be “hard to swallow” for Americans, according to CBS News.

Bergdahl’s hometown of Hailey, Idaho cancelled a June 28 homecoming parade “in the interest of public safety”, saying the town was too small for a large influx of supporters and journalists.

The town of 8,000 said it lacked the infrastructure to host a major event, citing expectations of a large crowd of “people who both want to support or protest against it”, according to a statement posted on a Bergdahl supporters’ website.

One persistent question circulating in Washington is whether Obama, whose administration spent years studying options for gaining Bergdahl’s release, misgauged the potential political fallout of his move.

Senator Lindsey Graham, a national security hawk, fuelled the argument that Obama approved the deal as a way to whittle down the number of detainees at Guantanamo.

Moves to free detainees from the US military prison in Guantanamo Bay are gathering pace as the administration works to close the notorious jail, a top US official said Thursday.

“There are a significant number of transfers in the pipeline at various stages and I think you’re going to be seeing substantial progress this year,” the senior administration official said.

The official refused to be drawn on any specific figures.