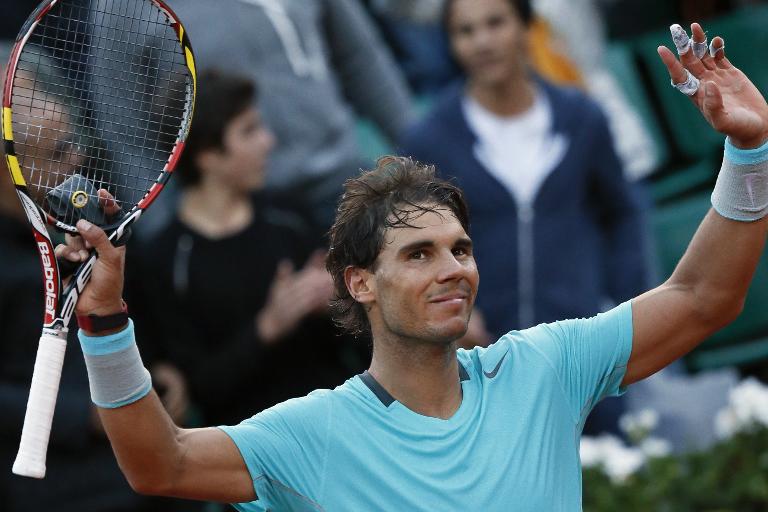 Nadal, who boasts an astonishing record in Paris of 64 wins and just one loss, has defied the critics who wondered whether he would make it this far after he suffered his worst season in a decade on European clay with three losses.

But despite dropping just one set on his way to another last-four date in the French capital, he appreciates the threat of Murray who pushed him to three sets in Rome last month.

“I’m not impressed by the way he’s playing on clay. I am not answering in a bad way. I’m saying in a good way. He can play very well on all the surfaces. He’s a candidate to win Roland Garros,” said the 28-year-old Spaniard of the Wimbledon champion.

Murray will attempt to become the first British man in 77 years to reach the French Open final.

Bunny Austin was the last Briton to get to the men’s championship match in 1937 while Fred Perry was the country’s last winner in Paris two years earlier.

But Murray is making a habit out of shredding the history books — his Wimbledon triumph last year ended Britain’s 77-year wait for a men’s title winner.

The 27-year-old lost to Nadal, who is bidding to be the first man to win five French Opens in a row, at the same stage in Paris in 2011 without winning a set.

In fact, Murray, who has 5-14 career record against Nadal, has lost all of his five meetings on clay with the Spaniard.

Despite the facts and figures stacking up against him, Murray believes he has the mental and physical weapons to shatter the Nadal legend.

Unlike his loss in 2011, Murray is now a two-time Grand Slam title winner himself.

“I obviously know how to win these tournaments now; back then I didn’t. I was trying extremely hard, but I had never done it,” said Murray who has has yet to win a claycourt title and has never made the final on the sport’s most challenging and wearying surface.

But he believes that there are cracks, albeit small ones, in the famed Nadal armour that can be exploited and he saw enough in Rome to justify his confidence.

“I definitely learned some things in that match. It was quite clear in my head, as well, what was working and what wasn’t,” he said.

“It was obviously different conditions here and a different court, different balls. When we played in Rome it was extremely cold and wet. I have been told it’s meant to be 25 or 26 degrees on Friday.”

The weather could play a crucial role with Nadal preferring warm, sunny weather which allows him to dictate the pace of the game and the ball.

Friday’s second semi-final sees world number two Novak Djokovic, who needs a French Open title to become just the eighth man to complete the career Grand Slam, tackle outspoken Latvian Ernests Gulbis who will be playing in his first semi-final at a major.

Djokovic is playing in his fourth successive French Open semi-final having been runner-up to Nadal in 2012.

Gulbis, seeded 18, has a 1-4 losing record against Djokovic with whom he trained in his youth at the Niki Pilic academy in Munich.

The 25-year-old, so long the sport’s enfant terrible, has finally matched up hard work to his undoubted talent and reached the semi-finals by knocking out fourth-seeded Roger Federer and then sixth-seeded Tomas Berdych.

In 2014, only Nadal has won more matches than the controversial big-hitter from Riga.

“He plays really well. He has a huge serve that, if it goes in, it can give him a lot of advantage,” said Djokovic.

“He knows how to move, how to anticipate. He’s definitely going to be aggressive and going to go for his shots against me. That’s his style.”