Home Sports Mickelson starts strong with eye toward US Open 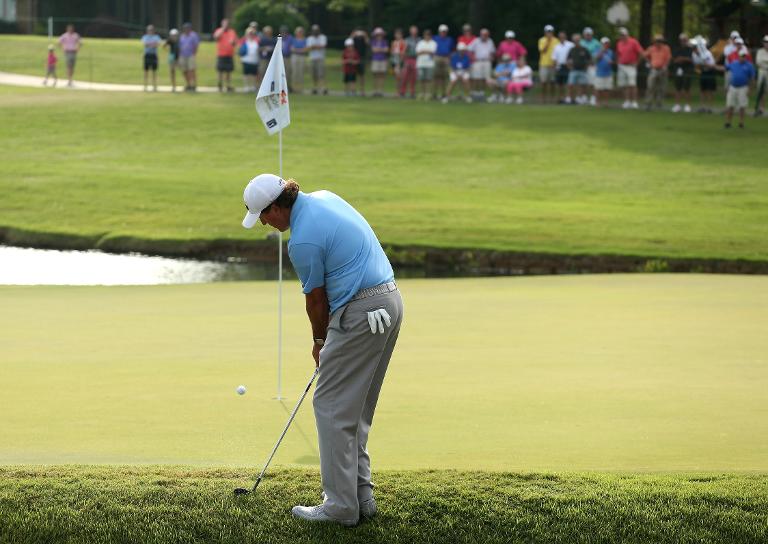 Phil Mickelson, building momentum for next week’s US Open, birdied three of his last four holes to fire a three-under par 67 at the storm-hit PGA St. Jude Classic.

The 43-year-old American left-hander, a five-time major champion, can complete a career grand slam with a victory in next week’s major championship at Pinehurst.

But Mickelson has a history of heartache at the event, having finished second a record six times, the first of those coming at Pinehurst in 1999.

That’s why Mickelson, who began his round off the 10th tee, was so happy with his finishing flourish.

“Finishing the round the way I did, it’s what I needed to do,” Mickelson said. “It’s the kind of momentum I needed going into the US Open.”

American Ben Crane held the clubhouse lead after an opening 63 concluded in milder conditions in the wake of a 3 1/2-hour storm delay that saw the first round suspended by darkness.

Peter Malnati was in the clubhouse on 65 with fellow American Joe Durant and two-time US Open winner Retief Goosen of South Africa on 66 and Mickelson in a pack on 67.

Among 60 players unable to complete the round, the low score belonged to American Billy Horschel, who was five-under with two holes to finish.

Australian Stuart Appleby was on four-under with one hole remaining, with Zach Johnson on the same spot with three holes to play and Jason Bohn also at four-under with four holes to finish.

Mickelson birdied the par-5 16th but closed his first nine holes with a bogey, rolling a putt 10 feet past the cup.

“That was a touch issue and it’s something I’ll have to work on to get ready for next week,” Mickelson said.

“It’s a great place to get ready for the US Open,” Mickelson said. “I had a nice round. It was tough with some of the winds.”

Goosen, another major winner warming up the week before Pinehurst, began on the back nine and ran off three birdies in a row starting at 13. He added another at 17 after sticking a second shot from the right rough five feet from the pin.

“The greens are perfect, probably the best we’ve putted on for a while.”

Mickelson has not had a top-10 finish this year in 13 starts but he had been lackluster last year before a runner-up effort in Memphis led to a runner-up showing at the Open, a Scottish Open win and his first British Open title.

“It was much better today,” Mickelson said. “I’m trying to take my time behind the shot, visualizing the shot. I’ve have been trying to be in control of the shot and what I have to do.

“The thing that has really helped me is I have been more creative, curving the ball more with the irons to try to get it close to the hole rather than just hitting a stock shot without curvature.”

Sweden’s Freddie Jacobson needs a top-four finish to have a chance to qualify for the US Open on world ranking after pulling out of qualifying.