Home World Gastro-diplomacy brings Putin in from the cold 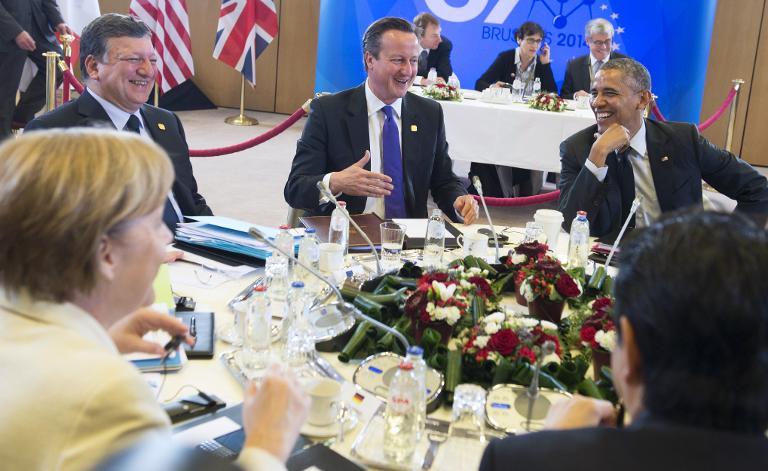 Vladimir Putin returned to the international centre stage on Thursday after being granted his first meetings with western leaders since the eruption of the Ukraine crisis.

Putin, who has been cold-shouldered by the United States and its allies since the March annexation of Crimea, met both British Prime Minister David Cameron and then French President Francois Hollande on a night of gastro-diplomacy in Paris.

The Russian leader’s stopover in the French capital, ahead of Friday’s D-Day anniversary ceremony in Normandy, came on a day when Ukraine’s government admitted it had lost control of part of its eastern border to pro-Russian separatists that the West says are being actively backed by Moscow.

Cameron arrived for his meeting with Putin directly from a Brussels meeting of G7 leaders which issued a warning that Russia faced further sanctions if it does not stop what they see as efforts to destabilise its southern neighbour.

“This was a meeting with a very clear and firm set of messages, which is that there is an opportunity for a successful, peaceful and stable Ukraine especially now there’s been a presidential election,” Cameron told the BBC.

“But the status quo, the situation today, is not acceptable and it needs to change.”

“Russia needs to properly recognise and work with this new president. We need de-escalation. We need to stop arms and people crossing the border. We need action on these fronts but if that happens there is a diplomatic path that is open to have proper relations between Ukraine and Russia and a successful future for the people of Ukraine, which is what they deserve.”

Aides to Hollande said the French president had urged Putin to agree to an early meeting with Ukraine’s president-elect Petro Poroshenko.

Putin will meet German Chancellor Angela Merkel on Friday before the D-Day ceremony. No formal meeting is scheduled with Barack Obama but the US president signalled in Brussels that he was likely to have some kind of exchange with his Russian counterpart.

“I have no doubt that I’ll see Mr Putin,” Obama said in Brussels. “Should we have the opportunity to talk, I’ll deliver the same message as I have throughout this crisis.

“If Russia’s provocations continue, it’s clear from our discussions here the G7 nations are ready to impose additional costs.”

The G7 leaders said they were united behind a common position on the crisis but there have been clear differences of emphasis all week over the balance between pursuing dialogue with Putin and signalling to him, and the Russian people, that they are isolated.

There is concern among some western officials that Putin’s trip to France could be seen by his domestic audience as him returning to the international top table.

Obama, who had a rushed dinner with Hollande in a Paris restaurant before the French leader’s late-night ‘supper’ with Putin, called on Russia to take concrete steps to demonstrate it was willing to respect Ukraine’s sovereignty and territorial integrity.

The US leader said Russia had to recognise Ukraine’s president-elect Petro Poroshenko, withdraw troops from the Ukrainian border and stop backing pro-Moscow rebels who are destabilising eastern Ukraine.

“We will have a chance to see what Mr Putin does over the next two, three, four weeks. If he remains on the current course we’ve already indicated the actions we are prepared to take.”

Obama’s dinner with Hollande was so curtailed, the US leader felt the need to move on to a second Parisian restaurant to finish the evening off.

The diplomatic shuttling in France came as the Ukrainian authorities admitted they had been forced to abandon three checkpoints on the border with Russia after nightly assaults by pro-Russian separatists.

AFP reporters in the area said at least one had been taken over by the rebels.

In a signal the situation in the country’s east may be about to deteriorate sharply, the government vowed to beef up its security presence to counter the rebels amid reports of continued fighting.

Putin signalled earlier this week that he could meet Poroshenko, the chocolate tycoon who is due to be inaugurated as president on Saturday, who will also be in Normandy, and insisted he was ready for talks with Obama.

“I don’t plan to avoid anyone,” Putin said in an interview in which he rejected claims of military intervention in Ukraine and accused the United States of aggressively pursuing the isolation of Russia.

Obama this week condemned Russia’s “dark tactics” in Ukraine in a hawkish speech in Poland reminiscent of the Cold War era.