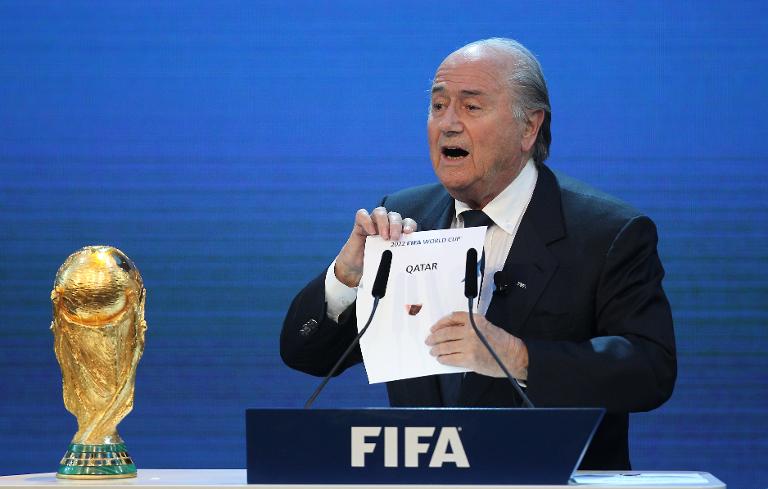 Football chief Sepp Blatter resisted calls to order a re-vote for the 2022 World Cup on Thursday, saying no decision could be taken until FIFA completes a probe of Qatar’s winning bid.

Blatter said FIFA would make no ruling until officials had assessed the findings of the corruption investigation headed by US lawyer Michael Garcia.

“I am not a prophet,” Blatter said. “We must wait for the results of the investigation.”

Blatter also reminded reporters that FIFA had already assured Qatar this year that the tournament would go ahead.

“All I would add, is that this year, in March, the executive committee of FIFA said that the 2022 World Cup in Qatar was not in question,” he said.

FIFA’s executive committee voted to give Russia the 2018 World Cup and Qatar the 2022 event at a vote in Zurich four years ago.

Garcia is looking into whether there was corruption in the awarding of the tournaments.

The 2022 vote has come under renewed scrutiny after The Sunday Times allegations that Qatari former Asian football chief Mohamed bin Hammam paid more than $5 million to win support for his country’s bid.

Asia’s top Olympic official on Thursday said the accusations against Qatar were motivated by “racism.”

Pressure for action grew, however, as UEFA president Michel Platini said a new vote should be called if corruption was proved.

Sheikh Ahmad al-Sabah, president of the Olympic Council of Asia and the Association of National Olympic Committees, strongly defended Qatar.

The attacks were “racist actions towards Qatar and Arabs, revealing the malice of those parties in a way that has no justification,” the International Sports Press Association quoted the Kuwaiti sheikh as saying.

“We will confront all such acts of racism and we will stand with Qatar so that no-one removes its right to organise the 2022 World Cup in Doha,” he added.

“I stand by my brothers in Qatar,” the sheikh declared.

He is to hand his report to a FIFA ethics committee on June 9, the day before the world body starts its annual congress in Sao Paulo.

UEFA President and FIFA executive member Platini, who voted for Qatar in 2010, told L’Equipe newspaper that if the corruption allegations were proven there should be a re-vote.

“If there is proof of corruption, it will take a new vote and sanctions,” Platini was quoted as saying.

Platini again rejected claims by English newspaper the Daily Telegraph this week that he held “a secret meeting” with Hammam.

He admitted attending a “private lunch” with Nicolas Sarkozy when he was France’s president, and a group of high-ranking Qataris.

Platini, a potential rival to Blatter in an election next year, insisted he was not influenced by anyone to vote for Qatar.

“On arriving at the lunch I found that the Qataris were there and I felt there was a subliminal message in them being present.

“However, I would emphasise that I went to the lunch to see the president and I did not know the Qataris would be there.

“Nobody told me who to vote for. Qatar never did and nor did Sarkozy,” Platini said.