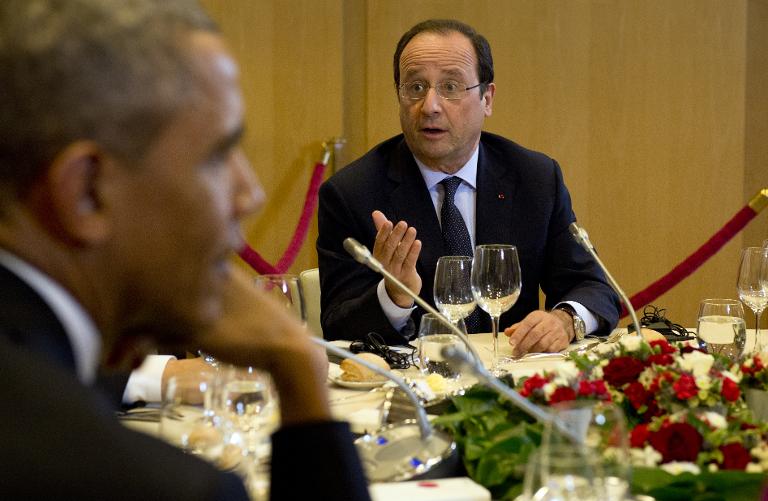 President Francois Hollande hosted his US counterpart Barack Obama for dinner Thursday, seeking to defend BNP Paribas bank from what France sees as disproportionate penalties that US authorities are set to impose.

French officials have raised pressure this week to safeguard the French lender from the prospect of a $10 billion bill over sanctions-busting.

Hollande said he would raise the issue at the dinner in a Paris restaurant, but in Brussels earlier Thursday Obama said he would not interfere in the judicial process.

“The rule of law is not determined by political expediency,” Obama said in the Belgian capital.

“Francois Hollande brought up the BNP issue at dinner, of course with respect to the US institutions, and in detail,” a French presidential source said after the dinner.

French officials have warned the threatened fine could have a dangerous impact on the economy and on relations.

They say that imposing a big penalty of 7.4 billion euros on the bank, one of the biggest in Europe, could destabilise the financial system, cut lending to businesses and impede economic recovery.

“Whatever the mistakes, the death penalty is not acceptable for any company,” said French Economy Minister Arnaud Montebourg.

Hollande, who had already written to Obama complaining about the size of the potential penalty, was dining with him in Paris on the eve of ceremonies on Friday to mark the 70th anniversary of the D-Day landings that changed the course of World War II.

Hollande had also hinted on Wednesday that talks to create the world’s top trade deal between the EU and US were at stake.

“Nothing should jeopardise the partnership between France and the United States, because we are engaged in other discussions and we expect reciprocity,” he said.

Accused of breaking US sanctions against Iran, Sudan and Cuba between 2002 and 2009, BNP Paribas also risks temporarily losing its US banking licence.

A number of other big European banks are at risk from US authorities for similar sanctions violations.

Many analysts say stiff penalties would neither bring down BNP Paribas nor create risks for the wider financial system.

“It is worse than disproportionate, it is a systemic risk for which there is absolutely no need in our country, Europe and the world,” he said on BFM Business radio.

French leverage against the US justice system would normally be limited. But Sapin told newspaper Le Monde: “This could affect the discussions under way on the free-trade treaty.”

The proposed Transatlantic Trade and Investment Partnership could eventually establish the world’s largest free trade and investment zone, covering some 820 million people and more than $1 trillion in annual two-way trade.

The EU and United States had hoped to wrap up discussions on the TTIP by the end of this year, although that deadline has been looking increasingly ambitious.

French Prime Minister Manuel Valls said “what we want is fair treatment for BNP Paribas, and this is the discussion that should take place tonight” between Hollande and Obama.

US officials appear to be trying to calm the waters with Secretary of State John Kerry agreeing that the penalties should be appropriate.

“We obviously want whatever it is to be fair and to reflect an appropriateness to whatever it is that is alleged to have taken place,” Kerry said Wednesday during a visit to Beirut.

Meanwhile The Wall Street Journal has reported that BNP’s board is split over whether one or more heads should fall at the bank to assuage the US authorities, including that of chief executive Baudouin Prot.

Sources told AFP that Georges Chodron de Courcel, the bank’s chief operating officer and a member of its board of directors, is one of the top names on a list of employees US authorities have said they want gone from the bank, the sources said.

Sapin also said on Thursday that a number of BNP Paribas employees had already been dismissed in connection with transactions that US authorities believe violated their sanctions.