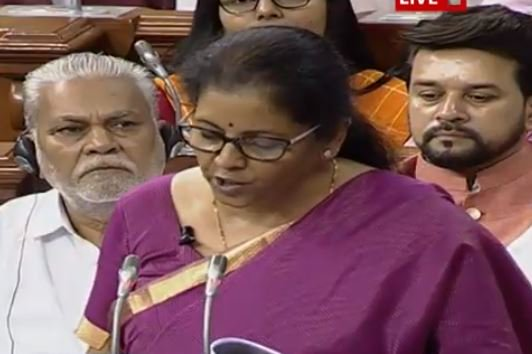 The recent election which brought us to this august House today was charged with brimming hope and desire for a bright and stable New India. Like never before, India celebrated its democracy by coming out to vote in large numbers, like never before. Voter turnout was the highest at 67.9%. Every section – young, old, first-time voters, voters since the first General Election, women – all turned up to stamp their approval of a performing Government. Through their unambiguous and firm mandate, they have reaffirmed “putting the nation first”. The people of India have validated the two goals for our country’s future: that of the national society and economic growth.

The first term of Hon’ble PM Narendra Modi-led-NDA-Government stood out as a performing Government, a Government whose signature was in the last mile delivery. Between 2014-19, we provided a rejuvenated Centre-State dynamic, cooperative federalism, GST Council, and a strident commitment to fiscal discipline. We had set the ball rolling for a New India, planned and assisted by the NITI Aayog, a broad-based think tank. We have shown by our deeds that the principle “Reform, Perform, Transform” can succeed.

Mega programmes and services which we initiated and delivered during those 5 years will now be further accelerated. We shall further simplify procedures, incentivize performance, reduce red-tape and make the best use of technology just as we did earlier. I am confident we will achieve our goals. Chankaya Niti Sutra too says: “Karya purusha karena lakshyam sampadyate.” Meaning “with determined human efforts, the task will surely be completed.

Our economy was at approximately US$ 1.85 trillion when we formed the Government in 2014. Within 5 years it has reached US$ 2.7 trillion. Hence, it is well within our capacity to reach the US$ 5 trillion in the next few years. In the interim Budget of 2019-20 presented in February 2019, we gave ourselves a Vision for the Decade. I flag here the ten points of our Vision laid before us:

a. Building physical and social infrastructure;

b. Digital India reaching every sector of the economy;

7. With this Vision set before us and with the mandate given by its people, we are determined to take India to that height that it richly deserves. I strongly believe that with the clear headed leadership of Hon’ble Prime Minister we can achieve our goal.

The Indian economy will grow to become a 3 trillion dollar economyin the current year. It is now the sixth largest in the world. Five years ago, it was at the 11th position. In Purchasing Power Parity terms, we are in fact, the 3rd largest economy already, only next to China and the USA.

To attain this and more we need to continue undertaking many structural reforms. In the last five years, we saw many big reforms in particular, in indirect taxation, bankruptcy and real estate. While these reforms were happening here in the Parliament, the common man’s life was being changed through MUDRA loans to help him do his business, and through several programmes it was being ensured that his/her kitchen had become smokeless, his/her house got electricity connection and women’s dignity was respected with the provision of toilets in homes. The common man was served even as major transformational reforms were being rolled out. And for this to continue we need to invest heavily in infrastructure, in digital economy and on job creation in small and medium firms.

All of India’s private sector industries – small, medium or large – have played a substantial role in growing our economy. I recall the words of an eminent industry leader, who said that his company’s growth has always aligned itself with India’s growth, before and post-independence. So if before-independence, India Inc. understood ‘Swadeshi’, today they understand ‘Make in India’. We do not look down upon legitimate profit-earning. Gone are the days of policy paralysis and license-quota-control regimes. India Inc. are India’s job-creators. They are the nation’s wealth-creators. Together, with mutual trust, we can gain, catalyze fast and attain sustained national growth. I wish to propose a number of initiatives as part of a framework for kick-starting the virtuous cycle of domestic and foreign investments.