The Supreme Court on Monday is scheduled to hear that the Central government’s application seeking an injunction against the proposed tractor rally or any other kind of protest which sought to disrupt the gathering and celebrations of the Republic Day on January 26.

A three-judge bench headed by Chief Justice of India Sharad Arvind Bobde will hear the application on January 18 along with pleas raising the issue of farmers protesting at Delhi borders.

The Centre, in an application filed through Delhi Police, has said that any proposed rally or protest which seeks to disrupt and disturb the Republic Day celebrations will cause an “embarrassment to the nation”.

Most of the farmers & experts are in favour of farm laws. After Supreme Court’s order, the laws can’t be implemented. Now we expect that farmers discuss the laws clause-wise on Jan 19 & tell govt what they want other than the repeal of the laws: Union Agriculture Mini @nstomar pic.twitter.com/ANwS3Xq8Xf

Besides, All India Kisan Sabha on Sunday distanced itself from the proposal to reconstitute the Supreme Court’s committee on farm laws. AIKS General Secretary Hannan Mollah said the proposal was not his organisation’s idea, and it has not presented any suggestions to the court.

Samyukta Kisan Morcha has claimed that more farmers from other states are scheduled to join the ongoing protests at and around Delhi borders.

Farmer union leader Darshan Pal said in a release, “We have already rejected even the very idea of “committee” proposed by the Union government or Supreme Court. The news of the Supreme Court-appointed committee members’ inclination towards the government is not hidden from anyone. We welcome member Bhupinder Mann’s decision to leave the committee, as well as we appeal to other members to express their opposition and hear the conscience by acknowledging the reality of these farm laws.”

Nearly 1,000 farmers from Odisha to join the ongoing protest of Sanyukta Kishan Morcha at the Delhi border.

“More than 500 Nava Nirman Kishan Sangathan members started their journey on January 15 by bus from Bhubaneswar. Another 500 farmers will proceed by train today. By January 21, more than 2,000 farmers will join Sanyukta Kishan Morcha at Delhi border to support them in the fight against new farm laws,” NKS convener Akshay Kumar

The deadlock between the centre and farmer leaders continues as the ninth round of discussion on farm laws remain inconclusive. The talks went underway on various clauses including the MSP and Essential Commodities Act. The next round of talks will be held on Jan 19.

Meanwhile, Agriculture Minister Narendra Singh Tomar urged farmer leaders to be flexible in their approach as has been done by the government.

On the other hand, the Congress party released a booklet on the three newly enacted farm laws to reach out to the people with facts regarding the issue, over which farmers have been agitating now for 50 days. According to sources, the booklet has been prepared to highlight the drawbacks of the new farm reform laws and their impact on farmers in the country.

Amid the ongoing farmers versus Centre row, Bhartiya Kisan Union’s national president Bhupinder Singh Mann stepped down from the Supreme Court-appointed committee that had been formulated to look into the three farm laws. He said he did not want to compromise with the interests of farmers and thereby decided to step down from the panel.

In his statement, Mann said, “As a farmer myself and a Union leader, in view of the prevailing sentiments and apprehensions amongst farm unions and the public in general, I am ready to sacrifice any position offered or given to me so as not to compromise the interests of Punjab and farmers of the country.” 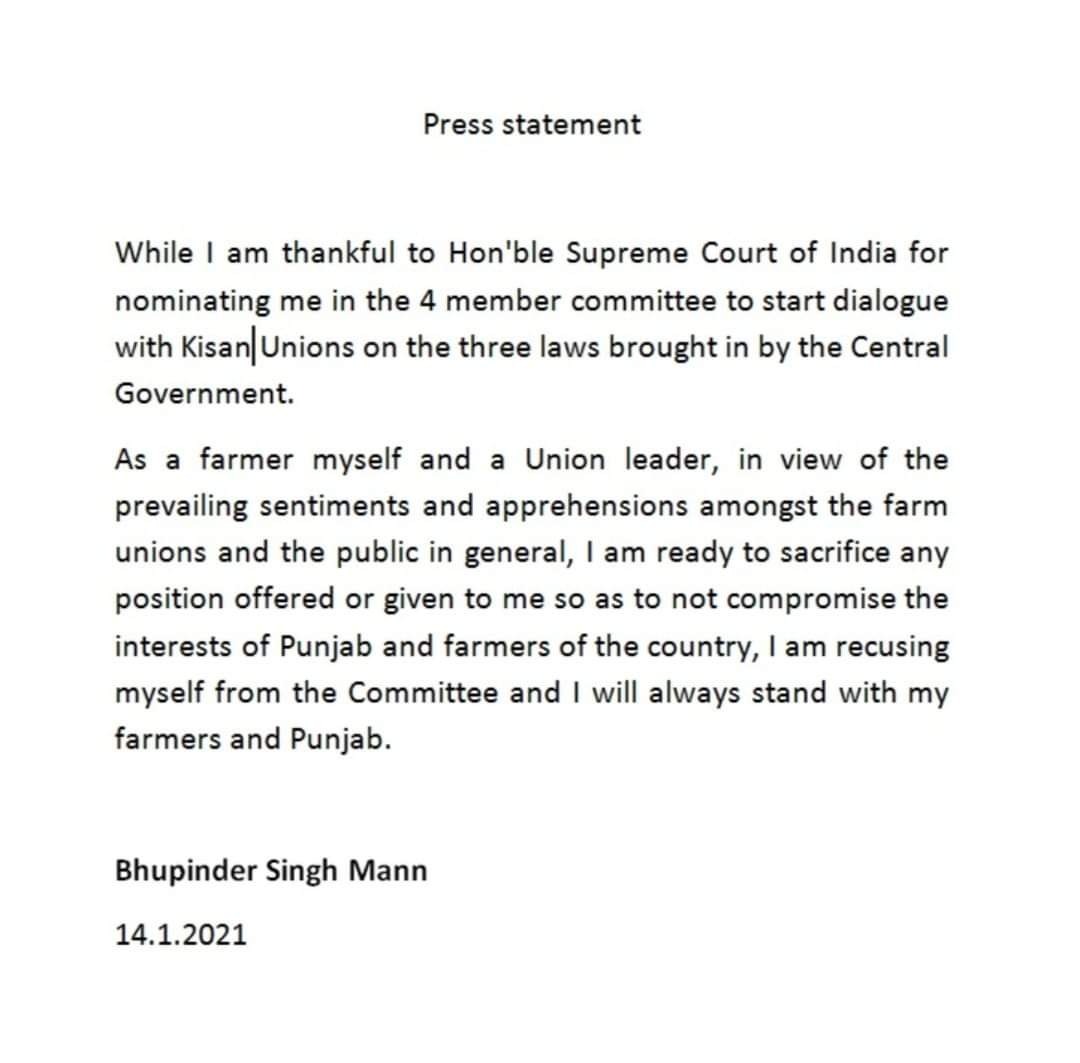 The matter will now go back to the court for further orders.

Terming the Supreme Court’s order staying the implementation of the three farm laws as “a historic step,” the Bar Council Of India has said that 90 percent of “peaceful farmers” are not in favour of continuing the agitation.

Earlier on Tuesday, the Supreme Court formed a four-member committee to hold discussions with the farmers and resolve their concerns regarding the three farm laws. 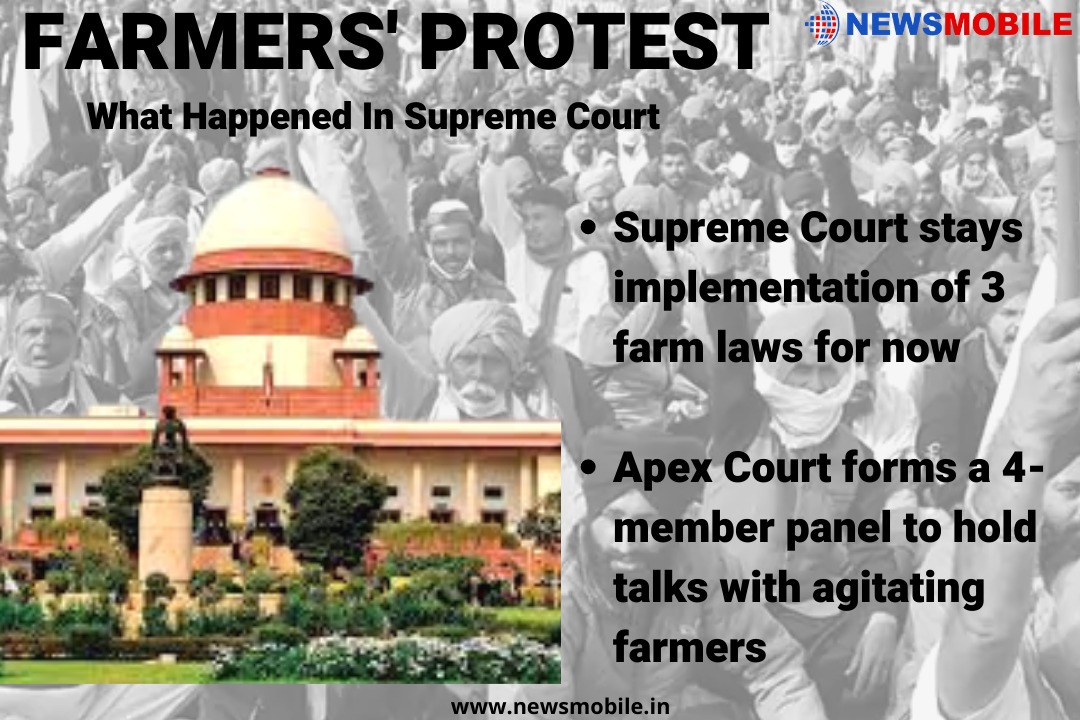