Today is the day to celebrate ‘Tea’ or ‘Chai’ – the one thing that pretty much starts a morning in almost all households in India. Chai not only united the country but is the one stop solution for happy events, sad ones, health discomforts or just a normal routine. India doesn’t need an excuse to drink piping hot cuppa tea!

Chai is indeed our constant, especially the roadside chai that is loved when its ‘kadak’. But what is interesting are the lives and stories of some ‘chaiwalas’ in India. These people lead their lives with a twist, so let’s unravel their stories.

Well, who doesn’t love tea and books? Laxman Rao doesn’t just sell chai at his stand outside Hindi Bhavan in New Delhi; he sells books that he has written and self-published.

Having lived his life by striking a balance between work and passion, he teaches us that hard work, sincerity and dedication towards one’s craft is essential for happiness in life. 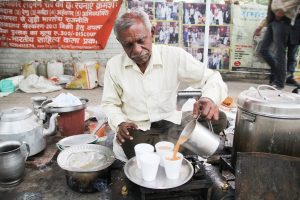 Have a religious devotion to chai? Nanak Chand’s chai stand in Old Delhi is decorated with images of Hindu gods so customers can pray while sipping their hot cup of tea.

Chai indeed is like devotion for most Indians and what better way than to combine it with devotion towards our Gods. 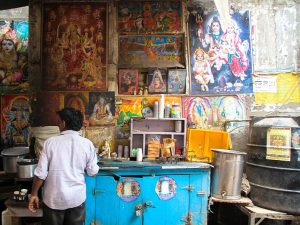 The Chai stall that personifies secularism

Bechan Baba has been taking care of the Chaukhamba Masjid, a mosque in the back lanes of Varanasi’s Old City, for many years. He also looks after the chai stand, started by his father, which sits in front of the alley leading to the dargah. A year ago, his son also joined him in the Chai business.

While the 14th century mosque was originally a Muslim pilgrimage site, Bechan Baba is a Hindu, and followers of all faiths often come to seek his wisdom – and a cup of the chai.

Wisdom and chai in Varanasi – a perfect recipe for secularism and all religions to co-exist. 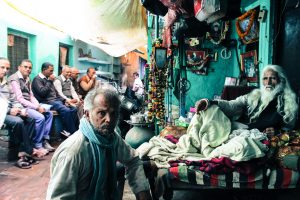 Sunita has been selling chai, cigarettes, gum, and Maggi noodles outside the famous Curlies at Anjuna Beach, Goa, since her childhood. Her work day starts at 4 pm and during the peak season lasts until 6 am. At 20 Rupees, Sunita’s chai doesn’t come cheap, but late night party goers depend on the caffeine and sugar fix to sustain them through the night. 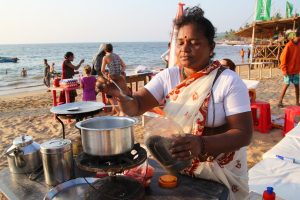 Chai At the Golden Temple

Imagine cooking for 500,000 people, while we get exhausted after cooking for even 5. That is the task faced by the volunteer chefs and chai wallahs at Amritsar’s Golden Temple. On the eve of Guru Nanak Jayanti, Sukhpreet Singh prepares chai in massive cauldrons, which contains 30 kilograms of dry milk powder diluted in 300 liters of water.

Thats the power of Chai and the devotion of these volunteers to serve humanity that visit the Golden Temple. 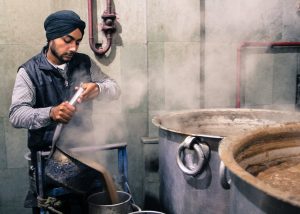 The Tea Stall Under A Tree

A few years ago, inspiration struck Raju Das while he walked down S.P. Mukherjee Road near Kolkata’s famed Kali Temple. “I saw this tree here. I thought it would be a good place for a business. So I made a chai stand.”

His on-the-spur-of-the-moment thought led him to a successful chai venture, which is visited by many. 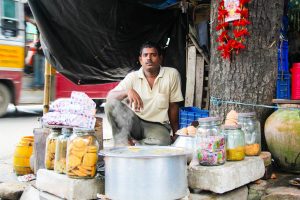 Outside Tololing Tea Stall in Leh, mornings are spent with the gurgling sound of chai wallahs making salty namkeen chai. They mix strongly brewed green tea with salt and baking soda, which gives the beverage its distinct pink color. Many locals add a heap of butter and mix in tsampa, roasted barley flour, for a hearty Ladakhi breakfast. 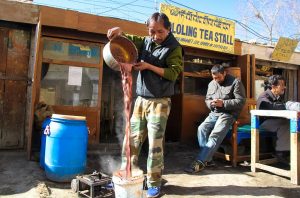 The need for chai can arise anytime. Those who find themselves on a shikara in the middle of Srinagar’s Dal Lake don’t have the time to wait to get back to land for a cuppa. The floating Raja Tea Stall serves kahwa, a Kashmiri specialty, brewed with saffron and cardamom and topped with crushed almonds. And that chai is indeed the best that you might get, especially when you visit Srinagar. 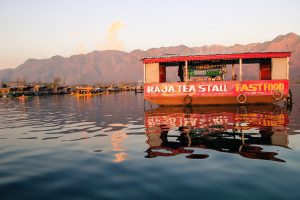 how unique these stories are. There might be several others too that await their stories to be heard. Thats the power of chai – one unifying factor for mankind in most parts of the world.