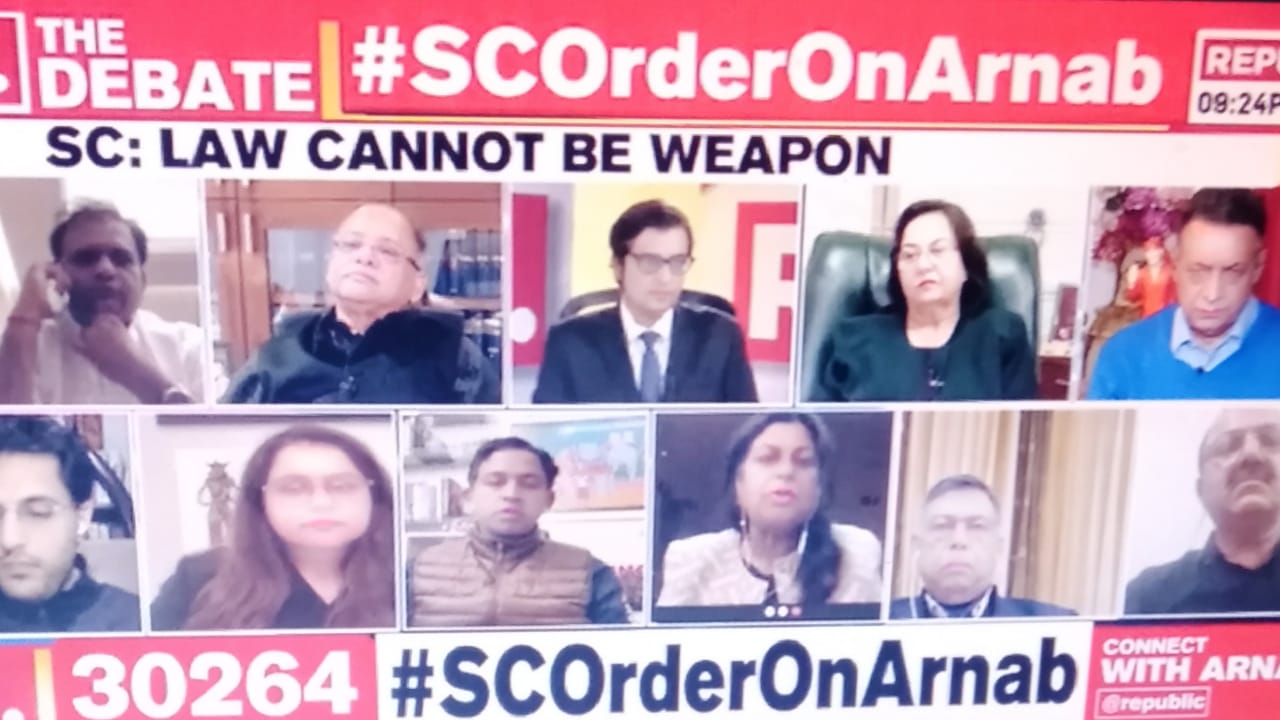 Talking about the same on the prime time debate on Republic TV, EIC Shukla told Arnab that “There is a pattern of harassment in the way Maharashtra government has dealt in his case.” He continued to add that according to him, “Supreme Court should go further in the investigation as it will help such cases in the future.” He further asks the panellists, “What about strictures on the guilty police officials, a strict action should be taken against those who have assaulted Arnab and they should be put behind the bars.”

He also said that” These orders by Supreme Court are a slap on the face of Maharashtra government.”

On Friday, a bench of the apex court, headed by Justice DY Chandrachud, said in Arnab Goswami’s bail order that the High Court abdicated its role as a protector of constitutional values and fundamental rights and added that criminal law should not become a tool for selective harassment for citizens.

The Bombay High Court abdicated its duty in protecting the liberties of a citizen who had been complaining that he was being targeted by the Maharashtra government for his unplayable views expressed in his TV channel, Justice Chandrachud said.

The Bombay High Court failed to take a prima facie view of the FIR against Republic TV Editor-in-Chief Arnab Goswami, the nature of accusation and the level of the charge and erred in not granting bail.

Arnab released the following statement after the Supreme Court’s judgment:

He added, “The words of the Supreme Court today will go down in history. The Maharashtra Government and the Mumbai Police should immediately stop their vicious misuse of the law to target Republic.”

Republic Media Network also issued a press release saying it is humbled and grateful to the Hon’ble Supreme Court of the country for its judgment that upholds personal liberty and reaffirms the citizenery’s faith in our constitution.

#SCOrderOnArnab | Republic Media Network is humbled and grateful to the Hon’ble Supreme Court of the country for its judgment that upholds personal liberty and reaffirms the citizenery’s faith in our constitution. pic.twitter.com/p2ZAVI2pCO

The bench noted that doors of the courts cannot be closed in such cases and courts should remain open for all cases of deprivation of personal liberty and such deprivation cannot even be for one day. Access to Justice needs to be democratised and it cannot be a selective tool for a few, it said.

“The High Court, in other words, failed to apply its mind to a fundamental issue that needed to be considered while dealing with a petition for quashing under Article 226 of the Constitution or Section 482 of the CrPC,” the bench said in its order.

The bench noted that the FIR recites that the spouse of the informant had a company carrying on the business of architecture, interior design and engineering consultancy.

“According to the informant, her husband was over the previous two years — having pressure as he did not receive the money of work carried out by him. The FIR recites that the deceased had called at the office of the appellant and spoken to his accountant for the payment of money,” the order said.

“Apart from the above statements, it has been stated that the deceased left behind a suicide note stating that his — money is stuck and following owners of respective companies are not paying our legitimate dues. Prima facie, on the application of the test which has been laid down by this court in a consistent line of authority, which has been noted above, it cannot be said that the appellant was guilty of having abetted the suicide within the meaning of Section 306 of the IPC. These observations, we must note, are prima facie at this stage since the High Court is still to take up the petition for quashing,” it added.

“These words, however, are not meaningless incantations but have to be assessed with reference to the contents of the particular FIR before the High Court. If the High Court were to carry out a prima facie evaluation, it would have been impossible for it not to notice the disconnect between the FIR and the provisions of Section 306 of the IPC,” it added.

The Supreme Court had, on November 11, granted interim bail to Arnab Goswami and two others in connection with the 2018 abetment to suicide case holding that the Bombay High Court was incorrect in not granting bail in the matter.

Goswami and two others were on November 4 arrested in connection with the 2018 suicide case. Later, they were sent to 14-day judicial custody by a lower court later that day.

The suicide case, in which a closure report was filed in 2019, was reopened after Naik’s wife Akshata approached a court. In September this year, Maharashtra Home Minister Anil Deshmukh had ordered a re-investigation into the case after a fresh complaint by Naik’s daughter.