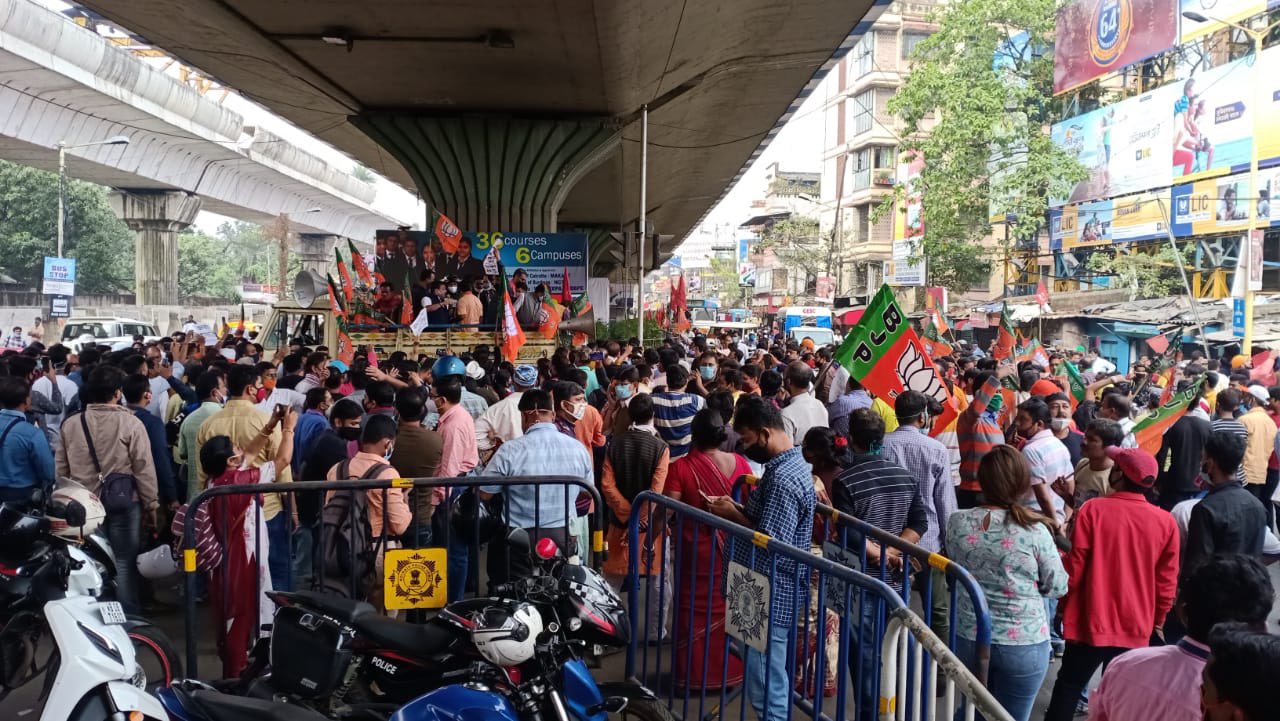 As BJP tries their best to establish a stronger presence in West Bengal to overthrow the Trinamool Congress(TMC) government in the state, the saffron party has found another issue in the state. BJP workers clashed with Police on Thursday evening over protesters demands to restart the Majerhat bridge, which has been under construction after collapsing in 2018.

“Ashish, BJP worker, when protested for reopening of Majherhat bridge was struck by the police so hard that his arm broke for a simple act of demanding the Right to the State’s infrastructure! The true picture of police brutality in Bengal.” Said BJP through their tweet.

Ashish, BJP worker, when protested for reopening of Majherhat bridge was struck by the police so hard that his arm broke for a simple act of demanding the Right to the State’s infrastructure!
The true picture of police brutality in Bengal. pic.twitter.com/EFsX1cSc4y

But instead of agreeing to BJP’s demand to throw open the bridge, CM used brute force! pic.twitter.com/flYgz1z3fj

Protesters were detained when Police resorted to mild lathicharge at Taratala crossing where barricades were put up to stop BJP activists from marching towards the under construction Majerhat bridge. BJP National General Secretary Kailash Vijayvargiya was to be part of the protests, but BJP activists were dispersed before the leader could reach the spot.

The four decade old Majerhat bridge collapsed in September 2018 killing two persons. The ruling TMC was attacked over the maintenance of flyovers in the city. Going beyond the Majerhat bridge issue, the contest between the BJP and Trinamool Congress(TMC) is heating up as the 2021 Assembly elections are less than six months away.

While the BJP is looking to gain 200 of 294 seats in West Bengal, what has been a challenge is inching into a state where the presence of regional parties is stronger. The BJP is trying to show their workers are being targeted due to political violence, while pointing fingers at the TMC and the collapse in the law and order in the state.

Controversial statements made by BJP leaders have drawn the ire of TMC with strong retorts to put the party down. On Wednesday, TMC leaders responded to BJP leader Agnimitra Paul comments on West Bengal Chief Minister Mamata Banerjee saying, “Didimoni has said, if you feel for it, go and rape. I have failed to give you jobs so go and rape for entertainment. She has said ‘go rape, I’ll compensate’.”

Two weeks ago at a rally in Haldia in East Midnapore district, BJP State President Dilip Ghosh said, “Didi’s brothers who are creating trouble should change their habits in the next six months otherwise you will have your arms, leg, ribs and head broken. You’ll have to take a trip to the hospital. And if you do more than that, then you will have to go the crematorium.”

While the TMC Is leaving no stone unturned, the TMC is fighting hard to make sure the opposition is shown in poor light and not perturbed by allegations against the ruling party. The TMC however is starting their aggressive campaigns to win confidence of voters of the party’s credibility to win a 3rd  term in the state.