We are living in the advent of technology and everything is available to us within a few clicks. But for trouble makers, technology has opened doors to create menace behind the scenes.In a shocking development, it was found that some unidentified cybercriminals have put out a system on the web that allows anyone to create fake nude images of women from a regular photograph.

In the research done by a cyber research agency Sensity, it was found that this system created online had already targeted at least 1,00,000 women. This has become a new channel of the threat of abuse on social media platforms.

With this, everyone’s safety and privacy are at stake online, since it doesn’t take much effort for anyone to strip anyone naked.

Also Read: Defence Minister Rajnath Singh says border tension with China must end, but India will not sacrifice an inch of land

In the backend, there is a bot that allows a person to upload a photograph of a woman and recognize it, and then transform it into naked images.

The bot feeds back a version of the image with clothes removed and replaced by fake skin and private parts. The tool is available for free, but the photos are initially watermarked, users can pay $1.5 (about ₹110) to remove it, the report said.

As per the Sensity report, Approximately 104,852 women have already been subjected to this abuse and had their personal “nude” images shared publicly as of the end of July 2020. The report also points out that the number of these images is growing drastically. 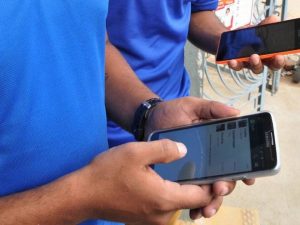 Talking about the growing harassment and abuse of women online, Dr. Rajul L Desai, Member of the National Commission of Women, says that “In any such case women should not keep it to themselves and suffer quietly, they should directly take it to Police, if they face anything like this, Government of India has formulated several cyber laws to protect the dignity of women.”

In India, these crimes are dealt strictly under the purview of cybersecurity laws. Usually, these sections apply- Section 499 (criminal defamation) and Section 354C of the Indian Penal Code (voyeurism), and Section 66E (depicting private parts of a person) and Section 67A (section against sexually explicit materials) of the Information Technology Act. However, crimes on the internet are sometimes tough to trace going beyond a country’s borders and with growing cases of cyber crimes, Police are looking at newer ways to crack down on troublemakers on the internet.