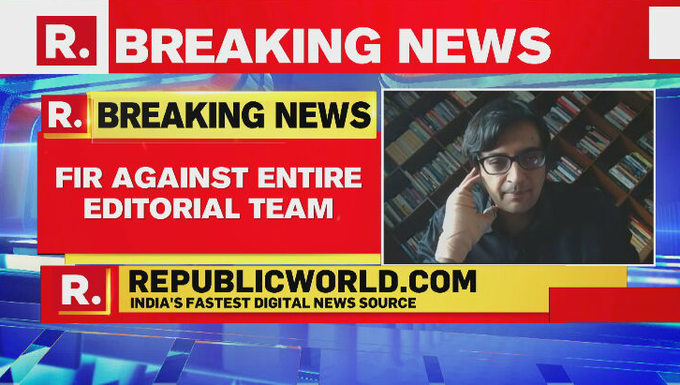 In a shocking update in the TRP scam investigation, the media fraternity is left stunned as the Mumbai Police has filed an FIR against the entire editorial team of Republic TV. This information was shared by Republic TV Editor- in- Chief Arnab Goswami. Goswami revealed that all 1000 employees of the network have been booked by the Mumbai Police, including top editors of the Network.

As per the latest information available, the case has been booked under a serious non-bailable offense. The FIR cites offenses under sections 500 and 34 of IPC.

Reacting on the same, NewsMobile Editor-in-Chief Saurabh Shukla released a video statement and condemned the FIR. Shukla quoted the incident as a brazen assault on media freedom. He added that this is an attack on media freedom and democracy dies when the media is muzzled.

I just saw the report that the entire editorial staff of @republic has been booked, this is brazen assault on media freedom and our democratic traditions. Democracy dies when media is muzzled. Hope the hon SC takes cognisance of what is happening and intervene #mediafreedom pic.twitter.com/8BKqSNy8km

Voicing his opinion against the harassment of Republic media network employees, he also urged other people from the media fraternity to come together and stand united against this incident. “This is a time for every journalist to unite and stand up, because today it is Arnab, tomorrow it can be you,” Said Saurabh Shukla, Newsmobile Editor-in-Chief.

“The idea is to stick together as Democracy is preserved through the institutions like free and fair journalism,” Added Shukla.
In recent weeks Republic Media Network was targeted where through a press conference, Mumbai Police Commissioner Param Bir Singh had said in order to bust an alleged ‘TRP scam’ into which the police were probing – Republic TV and two Marathi channels – Fakht Marathi and Box Cinema were found to be at fault.