Growing up in India, the concept of Dussehra and Diwali in my head was simple – school holidays, sweets, colourful rangolis and lots of crackers. In the foreign lands, it was perceived as a festival of lights with people adorning themselves in designer Bollywood costumes.

Are these mere festivals or is there an encrypted code for us to decipher? The critics have always tried to disregard Ramayana as a legend of mythology, so the Engineer in me kicked in and helped logically present my rendition of the essence of Dussehra and Diwali via the Ramayana Theorem.

The question I asked myself – “Why would someone go to such an extent to write an epic book without a deeper message? “

To ease everyone in the spirit of Dussehra and Diwali, it is a blessing to even write about the holy book of Ramayana which has helped millions find a way in their life. On a personal note, my son was born on Diwali day, so certainly it has a deep-rooted connection with my life and I have looked forward to writing this article since astrosmiles was born.

Astrosmiles tip: If you have a problem in life, just start reading Ramayana and you will find that your life sets path on a peaceful track. It is one of the best books to understand leadership and teamwork too. No surprises then that a leader like Mahatma Gandhi idolised Rama and chanted ” Hare Rama Hare Rama, Rama Rama Hare Hare..”. Rama represents the Sun (soul) and is the source energy in Vedic astrology.

Theorem #1: Rama is a state of being. Dashrath + Ayudh = Rama

King Dashrath was the father of Rama. Dashrath ruled Ayudhya.

The being born through the meditation of the 10 Indriyan(senses), in a state of Ayudh (no conflict) is Rama.

Rama is called Maryada Purushottam i.e. the symbol of righteousness, inclusion and equality. When his father asked him to give up the kingdom and exiled Rama for 14 years, Rama accepted it as a duty towards his King and his Father. Rama’s journey is full of challenges and He represents ideals of our soul. Following an objective approach of equality, dharma and the truth without conflict is Rama. 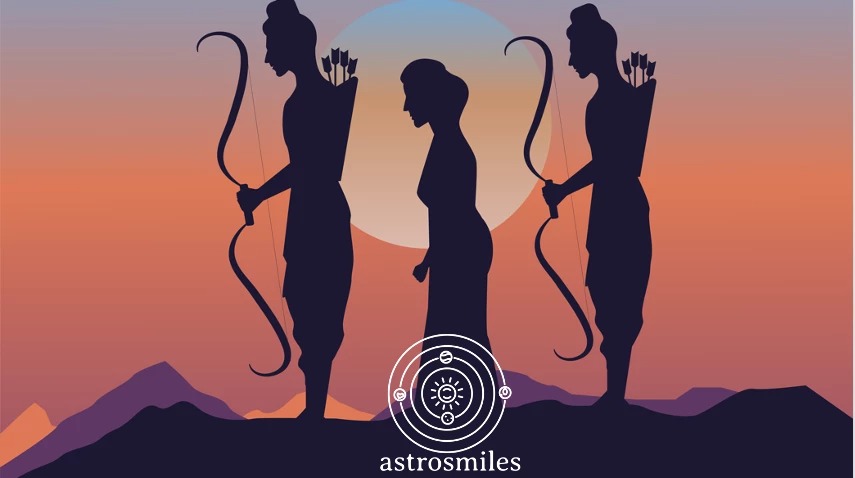 Rama, Sita and Lakshman (Rama’s brother) took to the jungles during their 14-year exile. This was a tough ask. Sita meditated on Rama for 13 years and no harm came to her until her meditation was distracted by a golden deer. Sita asked Rama to get her the golden deer. Rama asked Sita to stay put within the boundaries defined by him. Sita crossed the boundary defined by Rama and was captured by Ravana.

A child meditates on his Creator (Mother) for 13 years and then enters the world, but then the Maya enters the child – the social media, the distractions and the peer pressure start knitting the ego. The mind crosses the boundaries defined by the soul and sometimes makes the wrong choices with the ego misguiding the mind. The mind wanders and the soul goes searching for the mind captured by the ego.

Partnerships matter in this world. When the mind is lost in ego, the soul needs a soulmate to help overcome the challenges. This soulmate for Rama is Hanuman. Hanuman represents our passion and our friends. With a friend like Hanuman by his side, Rama was able to prepare for the war with Ravana to win back Sita.

Friends play a critical role in overcoming challenges of the mind. Without good friends and advisors, it will be an uphill task for anyone to overcome the challenges surrounded by ego. Surround yourself with positive energies in life and let go of the Ravanas. 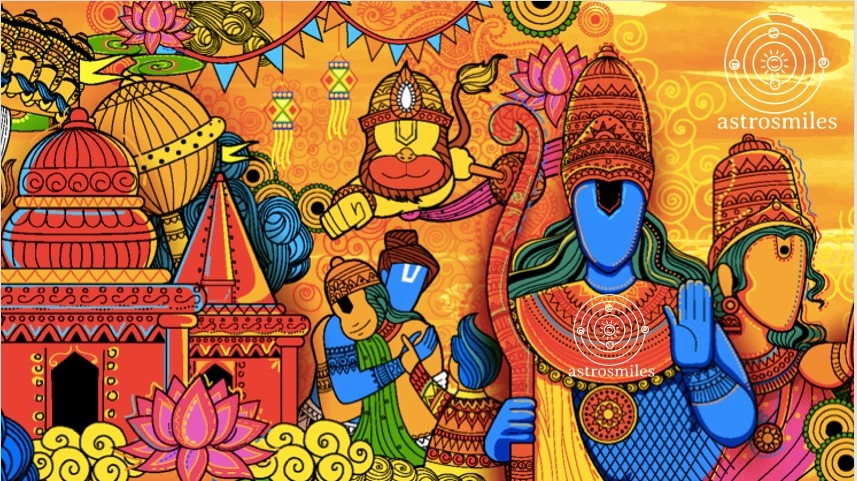 Astrosmiles tip: If there was a popular choice award for the characters of Ramayana, it would go to Lord Rama and Lord Hanuman. The plot revolves around them and conveys a message that the best of the souls on Earth do need support from their Hanuman ( sense of devotion and service).

Ravana had 10 heads. He was powerful and mighty. He was determined, learned and also a huge devotee of Lord Shiva. He ruled the largest kingdom on Earth and owned the flashiest golden palace. It was difficult for anyone to not surrender to Ravana. He had boons from Shiva that nobody could destroy him unless someone destroyed his core.

His opponent Rama, was a prince who had broken Shiva’s bow to win Sita’s hand in marriage against Ravana. It was a time to demonstrate the same courage. Rama knew that Ravana was no ordinary opponent. An opponent who can dare to take on Rama cannot be underestimated. It was a tough battle with a lot of losses but eventually Rama aimed at his navel and fired the arrow, this destroyed Ravana’s core.

Our ego also has many heads and disguises. Such is the power of the ego that only the soul can get the mind released from the clutches of desire, disguise and illusion. Only Rama could destroy Ravana to win Sita back. This day, when the soul beats the ego to win back the mind is celebrated as Dussehra.

Astrosmiles tip: ‘Dussehra’ comprises of two Hindi words ‘dus’ and ‘hara’, “dus” means ten and ‘hara’ is defeated. Dussehra is the day when the ten evil faces were destroyed by Rama. This festival, which symbolises the victory of the soul over the ego is celebrated on the tenth day of Navratri.

Theorem # 5: Soul + Mind – Ego = Enlightenment. i.e. Rama brings back Sita to Ayudhya after having beaten Ravana = the light within = Diwali.

A demanding war takes a toll on the best warriors. After 14 years of exile, wandering the jungles of life and defeating the ego to win back the mind, the soul is reunited with the mind – thus rejuvenating the life.

Rama was born in the Punarvasu nakshatra (constellation) of rejuvenation, restoration and homecoming. Rama would not have become Lord Rama if he had not obeyed his father’s wish of exile and followed his dharma as a son, husband, friend and even that of a fair opponent.

After defeating Ravana on Vijaydashmi ( a.k.a. Dussehra), it was time for Rama to return to his kingdom of Ayudhya with Sita. It took them 21 days to reach Ayudhya. The people of Ayudhya were happy that their King and Queen returned and they lit the streets of their city with lamps.

Astrosmiles salutes the spirit of Ramayana and kicks off the lovely month of Navratri, Dussehra and Diwali with hope and blessings of Lord Rama.

Wishing you and your loved ones a very happy festive month ahead. May the soul always guide your journey. Jai Shri Ram!