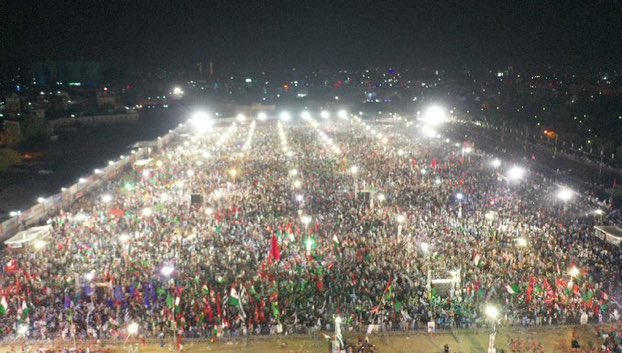 The JUI-F chief, according to sources, enquired about the former president’s health and held discussions on the country’s political situation and the Pakistan Democratic Movement (PDM) alliance.

The PDM, a coalition of 11 opposition parties of Pakistan is putting up in Karachi today, its second power show in three days against the PTI-led government at Bagh-e- Jinnah. Banners welcoming Pakistani Muslim League- Nawaz’s (PML-N) vice president Maryam Nawaz were put up in different parts of the city.

Also Read:Durga idol’s soil comes from brothels: Here’s the traditional significance behind this

Maryam arrived in Karachi on Sunday afternoon and was welcomed at the airport by a large number of party workers, Dawn reported.Maryam is accompanied by former Sindh governor and PML-N leader Mohammad Zubair. Her party has claimed to have set up camps on 17 spots to welcome her.PPP chairperson Bilawal Bhutto-Zardari said he is confident about the success of the show and eventual fall of the Imran Khan-led government.

Participants of the PDM ‘jalsa’ in Bagh e Jinnah will be provided free masks and sanitizers by People’s Doctor Forum.Sindh government representative Murtaza Wahab said that the PDM will prove to be the last nail in the coffin of incompetent rulers. “Days of the government that supports mafias are numbered,” he said.

Since Friday, thousands gathered in the central Pakistani city of Gujranwala to protest the government of Prime Minister Imran Khan, as an opposition alliance kicked off a campaign it hopes will be able to take advantage of rising prices and other frustrations to overthrow the government.