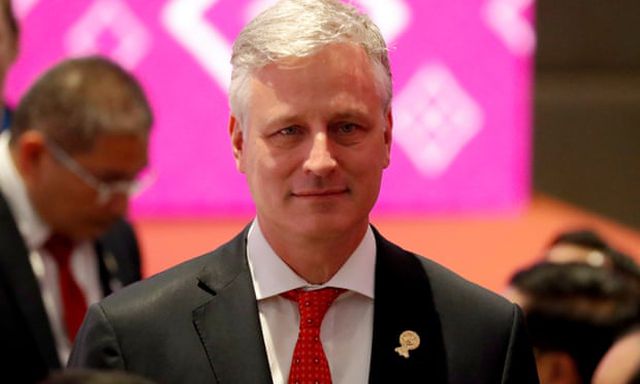 In a no holds barred attack on China, US National Security Adviser Robert O’Brien said on Friday that “something close to” a genocide was happening in China’s Xinjiang. He was speaking in context of China’s treatment of Muslims in the region.

“If not a genocide, something close to it going on in Xinjiang,” he said while addressing an online event organised by Aspen Institute where he was highlighting Chinese crackdown and human rights violations by Xi administration including the way it dealt with pro-democracy protests in Hong Kong.

Under the UN’s own definition, the Uighurs are facing a genocide pic.twitter.com/y7lTzLPLGo

He also referred to seizures by US customs of “massive numbers” of products made with human hair sourced from Xinjiang. “The Chinese are literally shaving the heads of Uighur women and making hair products and sending them to the United States,” he said.

Incidentally, the Trump administration has taken a very strong position against China on its treatment of Uighur and other minority Muslims in Xinjiang and imposed sanctions on officials it blamed for abuses.

As per US estimates, more than a million Muslims have been detained in Xinjiang and activists say crimes against humanity and genocide are taking place there. China has denied any abuses on it part and maintained that camps have been set up in the regional to equip people with vocational skills in a bid to fight extremism.

China is responsible for a slow-motion genocide against the Uighur, but was just elected to the UN Human Rights Council. UNGA Res.60/251 requires Council members “uphold the highest standards in the promotion and protection of human rights.” #Unqualified https://t.co/ITjYvKB4XH

US Secretary of State Mike Pompeo had in June dubbed reports of China using forced sterilization and abortion against Uighur Muslims as “shocking” and “disturbing”.

Amid rising global censure over its mass internment of Muslim minorities, the report stated that there are 380 suspected facilities in the Xinjiang region, which is about 40 per cent more than previous estimates.

“The findings of this research contradict Chinese officials’ claims that all ‘trainees’ from so-called vocational training centres had ‘graduated’ by late 2019. Instead, available evidence suggests that many extrajudicial detainees in Xinjiang’s vast ‘re-education’ network are now being formally charged and locked up in higher security facilities, including newly built or expanded prisons, or sent to walled factory compounds for coerced labour assignments,” ASPI’s Nathan Ruser had said.