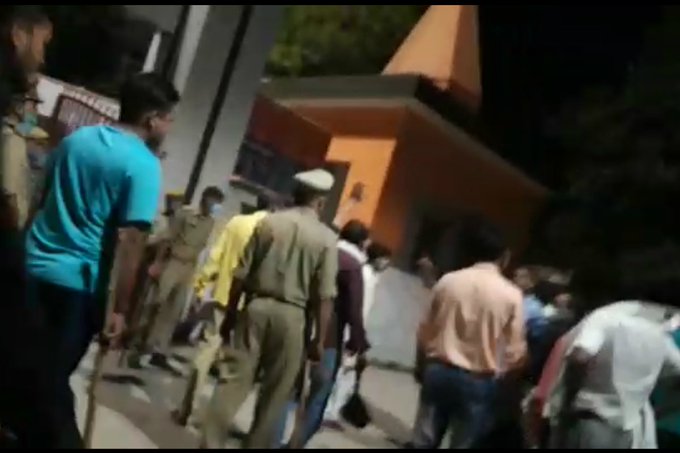 In an embarrassment for the Yogi Adityanath government in Uttar Pradesh(UP) in wake of the way the Hathras gangrape and Balia incidents played out, the latest video of ruckus created by BJP MLA Lokendra Pratap Singh, his son and supporters is now being widely circulated on social media platforms on Saturday. The video shows the BJP MLA and his supporters going on a rampage at Mohammadi Police Station in Lakhimpur post over the arrest of a party worker in an eve-teasing case.

Over-zealous party workers who reached the Police station at midnight are seen forcing the Police to release the accused who was behind bars. Police could ultimately not gather the courage to put up a strong fight oppose the MLA and his supporters. After several verbal encounters with the police, BJP supporters rescued the accused from police custody as Police stood helpless after eventually giving in to party workers.

While UP Police remains silent about the incident, the BJP MLA went on to say there was no ruckus on the spot and the incident was being made up to malign Singh’s image.

The opposition lashed out against the Yogi Adityanath government with UP Congress Chief Ajay Kumar saying, “The party will raise the issues of the poor law and order situation in the state.”

The government had released state crime statistics for the last nine years during the monsoon session of the state Assembly. They claimed that the situation has improved drastically under the current regime. However, the recent string of incidents which point at the lapse in law and order situation in the state prove otherwise.