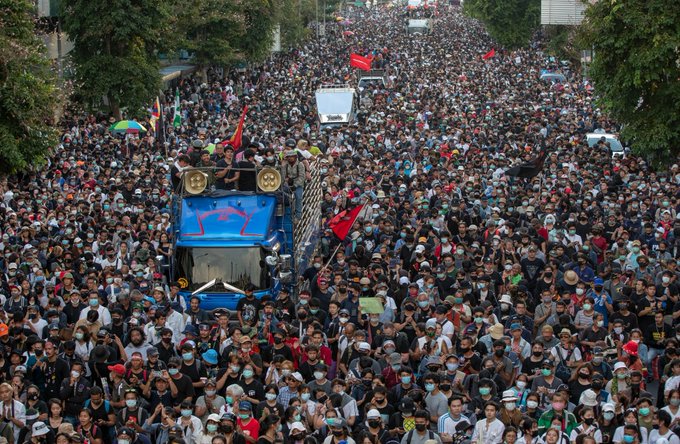 Protests erupt in Thailand on Thursday, two days in a row to defy the government’s decision to impose a state of emergency and banned demonstrations, which would curb the three month long protests. Instead, Central Bangkok was the meeting point for tens of thousands of protesters despite fears of spreading the coronavirus amidst the pandemic.

Protesters argued that pro-democracy protests were being silenced and as they dispersed at 10:00pm on Thursday, they vowed to come back the next day. Though Police announced on loudspeakers that they would be arrest those defying the state imposed emergency, it did not deter protesters who gathered at Ratchaprasong Intersection in Bangkok’s commercial hub as they chanted, jeered at police and waved lights from their cell phones.

Protestors demanded the release for 40 activists arrested earlier in the week, some who allegedly insulted the King who is supposed to be revered according to the Constitution and insulting the King or Queen can mean prison sentence upto 15 years. Other demands included, that Prime Minister Prayuth Chan-ocha must step down, Parliament must be dissolved and new elections should be held, the constitution, drafted by the military, should be rewritten, an end to the intimidation of dissidents and reforming of the monarchy. The main focus of protests appears to be curbing of King Vajiralongkorn’s powers and reforming the constitutional monarchy under a democratic system.

22 arrests were made for violating norms on Wednesday and reportedly obstructing a royal motorcade during a huge rally outside the Prime Minister’s office in Government House. It was after this protest that the emergency decree came into force at 4:00am local time on Thursday in Thailand.

This was the same location of bloodshed in 2010 amidst more than a decade of violence between supporters and opponents of the Thai establishment. Ratchaprasong Intersection is a commercial hub lined with luxury shopping malls and hotels.

Students began protesting in July but soon turned into people from different walks of society coming together in protest against the government and monarchy. What has irked protesters further in current protests are that authorities have powers to arrest protesters without warrants and seize electronic communications equipment, data and weapons in wake of the emergency decree. Online messages that threaten national security too will be under the scanner and persons found to be spreading such messages will be arrested.

The emergency decree also states that about five people can assemble at one time in public spaces and includes a nationwide ban on publishing and broadcasting news and information This includes online content that incites fear among the public. Assigned officers are permitted to implement new traffic rules and close certain premises to the public.