Home IJourno Walk The Talk; messages from the Mahatma’s teachings 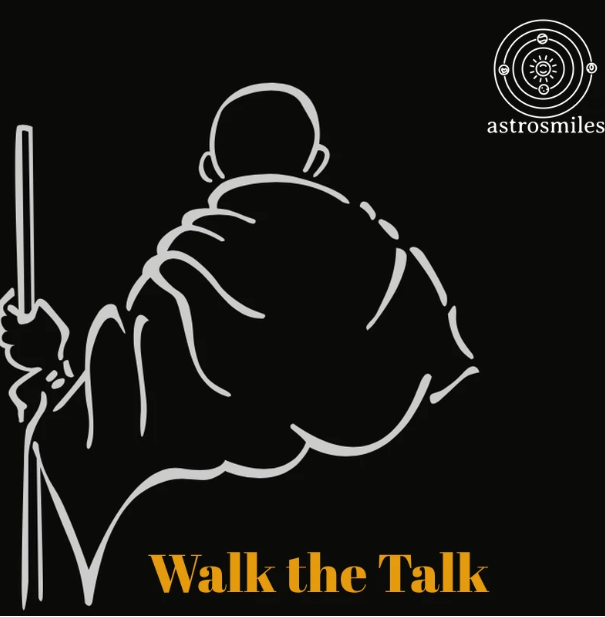 Creator has only one way to introduce us to the purpose of the soul – Challenges!

Growing up in a military family and losing my father at a very young age, I was inspired by
revolutionary leaders across the globe. As sensibility and astrology started sinking in my
soul, I realised the deeper essence of leadership and started admiring leaders who
changed the world without lifting a sword. They just walked and the whole world started
walking with them. Such was the power of these souls that they shook the very foundations of inequality and injustice. 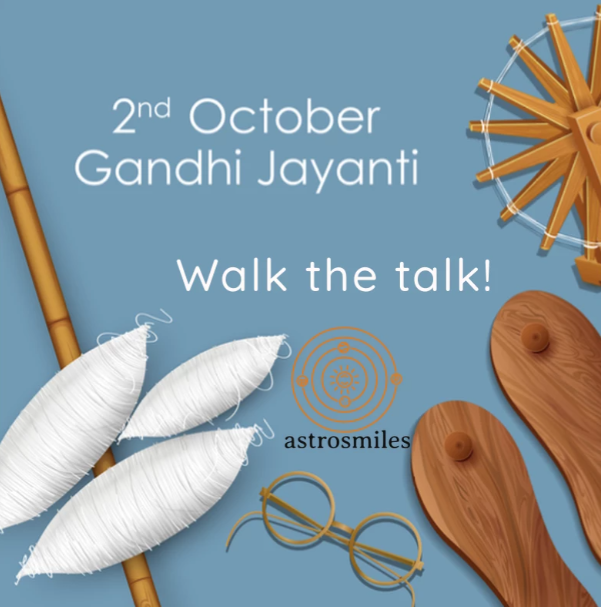 One such ”Great Soul” (Maha Atma) was the one and only – Mahatma Gandhi.

Overthrowing the colonial rule with non-violence and silence was unheard of during those
times. As a tribute to the Mahatma, it is our effort at astrosmiles to draw inspiration from the choices that Mr. Mohandas Karamchand Gandhi made in life that eventually led him to a pedestal like none other – the Father of Independent India and an inspiration for millions!

Let us look at the life and habits of one of the most iconic souls to walk the talk!

Fall to rise
In South-Africa, despite holding a first-class train ticket, Mohandas was thrown off the train
due to his skin colour. This was the trigger event for something which the racists would
regret. Spending 21 years in South Africa in a transformative mode from being a British
Indian to an Indian was the first sign that one of the greatest souls was setting foot back on his motherland.
Message: The challenging situations are the most transformative turning points in our life!

Sacrifice for the greater good
The lockdown and the isolation is being experienced by one and all today. Imagine 1919,
Mohandas Gandhi along with many like minded leaders was jailed for 5 years during which
some of the most brutal atrocities happened but this did not change his resolve to pursue
civil disobedience without violence. He was in and out of prison several times and sacrificed
for the greater good. Everyday, if every citizen does one act for the country and the world,
the collective country’s energy will grow and only then shall the energy of each individual rise.
Message: at the least, please wear a mask and do one thing for the environment everyday!

Silence is a strategic weapon
Mahatma Gandhi used to practice a vow of silence for a day on a weekly basis. Even in
astrology, this is one of the most powerful energy activations to increase ones influence over the actions everyday.
Message: Silence proves to be a great weapon to overcome the negativity and increase your influencing capacity.

Change through non-violence & fasting
His methods were different and certainly not understood by many – but they were deep
rooted in equality and well-being for all sections of the society. He believed that promoting
a violent approach to independence will only pass the power from one colonial leader to
another but will not bring about acceptance in society. The Mahatma did not eat for several
days (and did this several times in his life) to protest – not against the Government but
against the social injustice, untouchability and the caste & religious divide.

Message: fasting has much deeper effects than just health benefits. Changing your diet and habits has a huge impact on your creativity, purposeful thinking and the impact on society.

Walk the talk
Initiating the Salt Satyagraha, Gandhi started walking with just 78 people in one of the
turning points against the colonial rule which slowly turned into one of the most impactful
movements against the British Empire. Thousands of people joined this movement and
were even jailed. He walked the talk and it is said that this was the point where he himself
realised that the foundations of colonial rule can be uprooted.
Message: When you are out to do something that you are passionate about and never been done before, many will judge you and may not believe in you – but if you follow the right path and consistently persevere, you can make a significant contribution to this world for generations to come.

Do One Thing Purposefully
It may take a long time to understand ones purpose ( Gandhi picked pace in second part of his life) but one action everyday towards a higher cause will slowly reveal the purpose clearly one day. Mahatma Gandhi sacrificed so many aspects of his life to achieve the one thing that he wished everyday – Swarajya (Independence) for his country. Just after achieving independence, he was unfortunately assassinated by a violent human but it did not take away the purpose that he stood for. Some of the great souls who have walked this Earth are symbols of optimism and focus that we need ever so much in today’s time – Mahatma Gandhi is certainly a philosophy in itself and any amount of words are not enough to express the #gratitude towards his undying spirit. Astrosmiles salutes the
Mahatma!

Please take a moment on 2nd October to think about Mahatma Gandhi’s essence and
invoke the purposeful action in your life.

You can also check out the author’s e-book Being Hanuman.

(A tribute to the Mahatma by Amit Mehta)